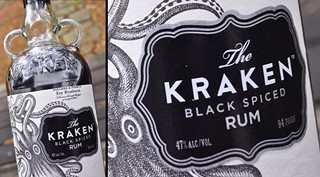 Yeah, you’ve got more to do on St. Patrick’s Day than read my column. But hey, you might be reading this while you wait for the parade to begin. That means there’s time after the parade to stop by your favorite package store and pick up one of this week’s ideas to continue the party!

Cap’n, she’s off the port bow!

That campy sci–fi line, “Release the kraken!” is going to have a rebirth once you’ve tasted this new–to–the–market dark, spiced rum, The Kraken. Named after the mythical (or is it?) sea monster, the easy drinking rum in it’s unusual packaging should be this season’s hot new liquor. On the rocks with a squirt of lime, it’s refreshing and mellow, mixed with ginger ale or Cola (Yeah, Krak’ and Coke), it takes on a nice chocolaty flavor. It’s doubly pleasant when used with Godiva chocolate liqueur.

Do we really need another flavored vodka? Yeah, we do if it the smokey, pork–fat scented Bakon! Bacon flavored vodka? Yep, everyone’s favorite meat candy has come to traditional potato vodka to give us that little pork pick–me–up.
Tasted straight, Bakon is just as you would expect, with a surprising bit of spice on the finish.  Of course, this is no–brainer for a Bloody Mary – but use straight tomato juice. Most Bloody Mary mixes will overpower the delicious taste of bacon.

Remember the Godiva chocolate liqueur from above? Combine that and Bakon in equal parts, add a splash of cream. Shake together with cracked ice and strain into a martini glass – hey, you got Bakon in my chocolate!

A taste of the old country

At this most Irish of times, there’s a new Irish whiskey to sample! Kellan Irish Whiskey is a pleasing blend of 22 percent unpeated malt whiskey and fine grain whiskey – both from legendary Irish distillery Cooley. This young whiskey is aged in former bourbon barrels. It’s light golden color is inviting and, for a young whiskey, it drinks remarkably well–balanced and pleasing. On the rocks, it mellows nicely into quite a nice sipper. Of course, it also mixes beautifully for your favorite cocktails. For whiskey newbies, Irish styles are nowhere akin to their smoky, peaty cousins that hail from Scotland. Nor are Irish whiskeys very closely related to Kentucky bourbons – where caramel sweetness and charred woodiness come into play.

Didn’t we just do vodka?

Yes, we did...and that’s how prolific these brands have become. Our last entry of the day is 4 Orange, a vodka that is actually distilled in Florida from four varieties of native oranges: Hamlin, Parson Brown, Valencia and Temple. That previous sentence contains an important point. Most flavored vodkas are distilled from neutral spirits – grains or potatoes. 4 Orange is distilled from 100 percent neutral orange spirits. That difference means an intense orange color that won’t fade, and concentrated flavors that present a nicely balanced, easy drinking spirits. The maker claims that each bottles contains the equivalent of 20 oranges. I’m pretty sure a Screwdriver made with 4 Orange would make a complete breakfast - a meal not to be missed.