Visit laikenlove.com for more info on Laiken Williams and her music.

Welcome to 'Remember When.’ This is a chance for Savannah art veterans to reminisce on some of their favorite events in the city’s history. Whether it’s a concert, theater production, festival, visual art show, dance production, or comedy show, Savannah has a long history of memorable art and now is as good a time as any to look back on some of the best.

Today, we’re catching up with Laiken Williams, a local singing powerhouse who has been a crucial part of the music community in our city for years. In the pre-COVID world, you could find her all over Savannah at any number of venues and gigs.

Rather than reflect on a gig of her own, Laiken decided to look back on a Savannah Music Festival performance from The Suffers in 2016 at Ships of the Sea Museum. It’s a performance that stuck with her from that day forward, and was particularly inspiring and energizing for her as an artist. 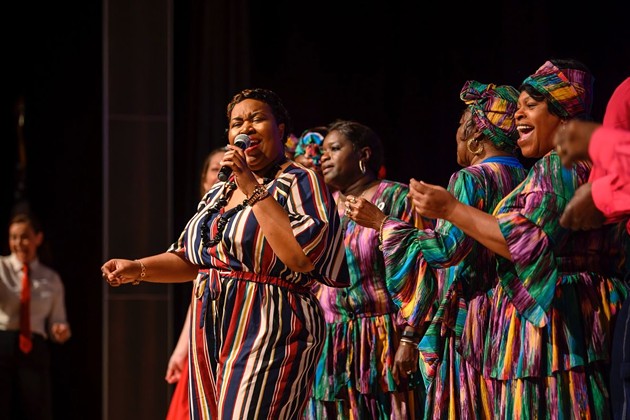 What about this gig stays with you after four years?

I had just found out about this group on Spotify the summer before the festival. I was flipping through SMF’s catalog and saw they were coming to Savannah. I had to get a ticket! Soul music is near and dear to my heart. I was fully sold when I saw this plus size chick with big hair singing with a BIG horn section. #goals #goals #goals.

I’ve been trying to figure out a direction that I want to go in when I finally decide to make original music. Discovering this group along with my other faves Alabama Shakes, Sharon Jones, and Amy Winehouse, I have a good feeling for where I’m heading.

At that time in Savannah, what was the music scene like?

At this particular time it was during the Savannah Music Festival. You can’t beat three weeks of music from around the world. The local scene was (and still is, minus the pandemic) pretty vibrant as well. Savannah’s music scene has a variety of acts that locals and tourists can see seven days a week.

Where were you in your career and life at that point?

In 2016, I was pretty heavy on the bar scene. I had a full Friday rotation between Kessler’s Rocks on the Roof and Casimir Lounge, and a variety of other places. I also made some big leaps onto the music scene with tributes spanning from The Lucas Theater (Songs in the Key of Wonder) to Tybee Post Theater (Women of Blues).

At this time I was still very active with the Savannah Philharmonic Chorus. The Suffers concert was a gift to myself. It was hella inspiring. I sat there most of the time with my eyes closed absorbing every instrument as tears rolled down my face. Music is my drug of choice.

Is there one moment from the festival that you remember most fondly?

The band was on stage jamming and I started to hear a familiar tune. They started jamming to “Back in the Day” by Erykah Badu. I was literally the only person in the audience who knew the song. It was a little too obvious when the horn section gave me props from the stage. We had a moment!

I got to meet the band after the concert and had an amazing conversation with them about their journey. What an impression!