Rename this bridge: Now is the time of reckoning 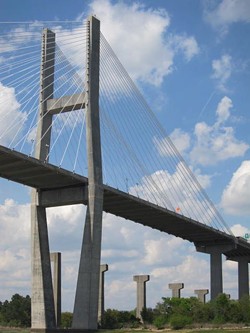 HISTORY is a heavy thing. It weighs on us even if we’re not conscious of it, the deeds and consequences of the past dragging behind as time marches onward.

History is so heavy it’s literally carved in stone, on once-sacred mountains and towering marble monuments.

History is about the facts, and how we tell the story of those facts. History is dates, it is words, it is names. It is supposed to be about truth, but the truth can look different depending on where you’re standing. The story only has room for so many tellers.

History is also malleable, changeable as the flow of a river, dark places enlightened by new perspectives, bronze statues folding into a crumpled pile in an instant. Flags come down. Narratives shift.

When it comes to Eugene Talmadge, history is fairly clear: The former Georgia governor promoted segregation and white supremacy with wild-eyed self-righteousness, a chest-beating racist who exploited the apartheid mission of Jim Crow to the fullest extent.

His repression of the rights of black citizens and advocacy for their lynching is well-documented. He was a sweaty, suspender-snapping bully with a bullhorn.

No one I know would even accept a Facebook friend request from him, let alone admit to aligning themselves with his politics. Yet his name is memorialized on the gateway to Savannah, that futuristic cabled arc that is one of the city’s most iconic symbols.

The Talmadge Bridge might look like bright, shiny progress, but the weight of its odious legacy could sink a container ship.

“It’s the most modern thing in the landscape, but the name doesn’t reflect it,” remarked SCAD architecture chair Dr. Robin Williams during last week’s public discussion, “Renaming the Talmadge Bridge.”

It’s also more and more outrageous, given the current cultural dialogue. As communities around the South make swift and decisive changes around the presentation of their Confederate monuments, it shouldn’t take much debate to realize that it’s near impossible to promote Savannah as an international economic and artistic lode star when its biggest piece of infrastructure is named after a 20th century Klan supporter.

The Sept. 5 event—sponsored by Span the Gap and The Beach Institute—was scheduled long before the horror show in Charlottesville last month, and the effort to change the name of the bridge began long before that. The latest endeavor is headed up by Ron Christopher, a Savannah native who graduated from Harvard Law School by way of Hitch Village and has taken the helm of Span the Gap, launched in 2015 by artist/activist Lisa D. Watson.

A survey last year garnered more than thousands of responses in favor of changing the name, the majority suggesting it be replaced with Tomochichi.

Ron and Lisa helped organize last week’s panel, which drew several hundred people to the Savannah Theatre, the vast majority it seemed not so much questioning whether or not the name ought to be changed, but how and when already.

“It is a wrong that needs to be righted,” said panelist Bernetta Lanier, a fourth generation Savannahian and economic development consultant who deeply impressed me when she ran for District 1 seat on City Council in 2015.

Unfortunately, it’s not as simple as taking a Sharpie to the green highway sign. The change requires a majority vote from both houses of the Georgia Assembly, an action that has thus far been prevented from even reaching the floor of the Gold Dome, in spite of having been championed by three Savannah mayors, including John Rousakis, Dr. Otis Johnson—who served as moderator of the panel—and current mayor Eddie DeLoach.

It is no accident Talmadge’s name was memorialized on the bridge in the first place, propounded Dr. Johnson, but was a direct response to the Brown vs. the Board of Education decision to integrate public schools by the political power structure back in 1954.

Neither was it an afterthought when the original cantilever truss bridge was replaced with the modern spires in 1991 and Talmadge’s name came with it.

No, continued Dr. Johnson, Talmadge’s name is meant to be an insult and a warning to those who would challenge the families that still have a firm fist on Georgia’s economics and politics.

“We brought the name change to the state delegation two years ago,” recounted pioneering business pioneer Pamela Oglesby. “And their response was, ‘Did you speak to Mrs. Talmadge?’”

They didn’t mean Eugene’s widow but the third wife of the late U.S. Senator Herman Talmadge, Eugene’s son who thwarted the Civil Rights movement at every turn during his congressional tenure. Other Talmadge family members reportedly intimidated Chatham Country legislators in the hallway when they tried to bring the name change to the floor in 2013.

But it is only a matter of time before such influence loses its grip, and that time is coming sooner than later.

“No lie can live forever,” nodded Rev. Francys Johnson, who reminded that the bridge is just one example of the constant historical affronts African Americans must endure every day in this city.

From the audience, Sen. Lester Jackson, chair of the Georgia Legislative Black Caucus, announced that he would push the issue during the next legislative session, though he warned that it might be difficult to get the entire GA on board with changing the name of one lil’ bridge.

Perhaps there is a coalition to be built of other communities around the state who are challenging the narrative embedded in their infrastructure?

While the discussion was impassioned and fascinating (Rev. Francys told of his 102 year-old grandfather, regrettably named after Eugene Talmadge), all seven members of the panel—which also included prominent native Dr. Mark Murphy, progressive commentator John McMasters and myself—were on the same page of bringing Savannah onto the just side of history. (As for a name, the consensus at the discussion was that the simple “Savannah Bridge” would do just fine.)

Not everyone in the audience agreed—a couple of brave souls raised their hands when I asked—and I was disappointed that they didn’t stay for Q&A because I honestly wanted to hear what they had to say.

I understand how some could see removing Talmadge’s name from the bridge as “erasure,” and there might be something to that. I echoed Lisa Watson’s suggestion that a historical marker could be placed on the remaining pylons of the old bridge, jutting up next to Bay Street.

This brought a lot of groans and tsktsks, but I made the point that Nazi concentration camps still exist as educational sites for future generations so that the tyranny and tragedy is not forgotten.

We must never forget who Eugene Talmadge was and what he stood for—and we mustn’t let history forgive it: History is about the facts, and how we tell the story about those facts.

The poet Aberjhani—whose eloquent writings on the Talmadge Bridge can be found at writingjunkie.net—lamented last year that it “should not be necessary to stage marches across the bridge or have sit-ins” to remove Talmadge’s name.

I posited to the crowd that maybe it’s exactly what’s necessary—that change will take nothing less than an act of civil disobedience by the people of Savannah who live in its present and believe in its future.

The image of hundreds of people on the bridge together would send a definitive message, the only snafu being that it might be a federal crime.

“This is serious and dangerous work,” warned Rev. Francys, right before he broke into a grin and informed that the NAACP has a bail bond fund that he might access as president of the state chapter.

Civil Rights veteran Dr. Johnson clapped the podium with a smile, vowing his participation. “Come bail me out!”

Several people came up afterwards and asked when we march. That kind of organizing isn’t my forte, but I’ll be there with bells on, as they say.

All I know is that history is heavy, but the narrative is shifting. Now is the time to right the wrong, to reckon with power and claim our own. Are we willing to span the gap?

More »
More The (Civil) Society Column »
All News & Opinion »
Comments (4)
Add a comment
Subscribe to this thread:
By Email