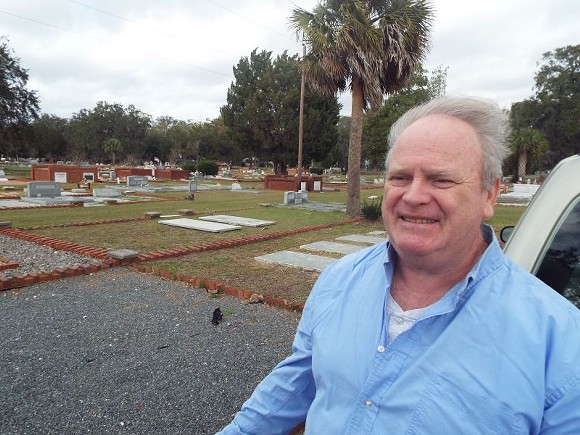 Here on Georgia’s coast, I haven’t heard of anyone remembering the shocking events that happened locally just months after the “day that will live in infamy.” So here I am, returning to a graveyard that I first visited back in 1999.

At a shady burial plot at Brunswick’s Palmetto Cemetery, I help retired merchant seaman Michael Higgins slowly step over a few inches of brick wall that surrounds the graves. Higgins also was there in 1999.

“I had been at sea and I had been on tankers,” he tells me, as we again say aloud the names on a marble stone: Alfredo Carmona, Joseph Geary, Arthur Genter, Charles Rivette, Osswald Ryder. “I had to repay them for their sacrifice.”

These five men were among 22 who died when a German submarine, on April 8, 1942, torpedoed a pair of oil-carrying commercial vessels, the SS Oklahoma and the Esso Baton Rouge, just off the coast of St. Simons Island.

Just three months prior, on January 19, 43 Americans, many of them from Savannah, died on another merchant ship, the City of Atlanta, in an attack by the same U-boat off the coast of Cape Hatteras, N.C.

The war had come to our area quickly and unexpectedly. 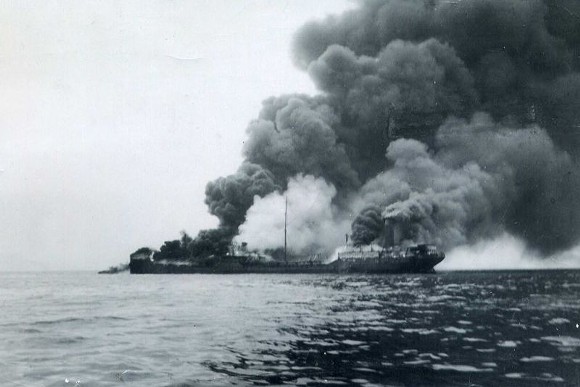 Photo by Sonja Olsen Kinard
The torpedoing of the SS Oklahoma and Esso Baton Rouge on April 8, 1942 brought the war close to home for coastal Georgia.

“Terror is the only way that you can describe it,” Higgins says. “The Germans are there. They’re supposed to be 3,000 miles away but they’re right there. It was unbelievable.”

Mimi Rogers, curator at the Coastal Georgia Historical Society, which operates the St. Simons Island Lighthouse, says the tanker blasts rattled windows on the coast and jolted folks out of a naïve sense of security.

“People here felt safe,” says Rogers. “And then all of a sudden, in the middle of the night, there was this huge explosion.”

Rogers is working to shed light on this history at a museum planned for the Old Coast Guard Station on St. Simons Island, where the seamen were debriefed after the attack.

“They were having coffee in the mess hall,” she says. “They knew it was a torpedo. Water started flooding the ships.”

The cemetery stone says Carmona was a “wiper.” That meant he might have been working in the engine room when the torpedo struck. Instant death. The others, listed as cook, oiler, ordinary seaman and messman, respectively, met likewise gruesome ends.

Rivette’s body washed ashore near Jacksonville. All of their remains were so badly burned that no one could identify them. They were laid to rest together in a grave marked, at the time, only with the words “Unknown Seamen 1942.”

The nameless memorial didn’t sit well with Higgins, a former member of Brunswick’s Propeller Club and a history buff, enamored especially of the American Revolution.

In 1998, he started the painstaking process of identifying these men, contacting their relatives (Carmona’s are still unlocated) and planning a proper memorial. To determine the names of these five, he had to track down the remains of all 22 who died that night.

“Why are they not accounted for?” he asks. “That was the nut to crack.”

His mystery-solving first brought he and I to this grave in 1999, when a bugler played taps, community leaders paid their respects and lots of news stories were written.

“It was satisfying to know that I had done something for these people,” he says.

The 75th seems a fitting time to revisit this story, since I can’t write about the millions who perished in WWII. But I can write about five. How many will you remember?