This nepotism thing can sometimes be a real bitch. When Winona Ryder backed out of The Godfather: Part III due to exhaustion, Francis Coppola cast his daughter Sofia in the pivotal role, and her wretched performance kept that movie off-balance for its entire running time. George Lucas allowed his young son Jett to name a character in the Star Wars prequels, and he came up with Jar Jar Binks (no confirmation on who named Count Dooku, which as many have noted sounds like something you'd find in a baby's diaper). Emma Roberts (Julia's niece), Tori Spelling (Aaron's daughter), Patrick Wayne (John's son) -- all performers of minimal talent whose Hollywood presence can be credited to their lineage. 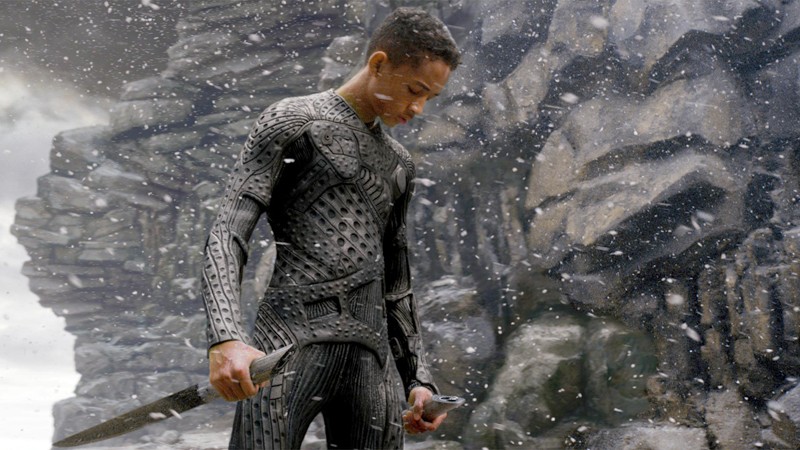 With After Earth, Will Smith and his son Jaden seem to be heading down this precipitous path. While Will was clearly the lead in their previous joint effort, The Pursuit of Happyness, he made it clear that he wanted his young son to share the superstar spotlight in this new film -- no longer as dicey a proposition for studios, given the huge success of Jaden's Karate Kid remake. But After Earth is simply a bad movie, and while it probably won't damage Big Willy's A-list standing, it stands to potentially halt little Jaden's momentum right in its tracks.

Like this spring's disappointing Oblivion (which at least had a spectacular production design going for it), this stillborn drama is set in a future in which the planet Earth has been rendered uninhabitable by alien invaders (called Ursas) and everyone still alive is now living in outer-space colonies far, far away. The imaginatively named Cypher Raige (the senior Smith) is a legend because, like Daredevil, he was born without fear and is thus able to slaughter Ursas at, uh, will. His son Kitai (the junior Smith), on the other hand, is frightened of the alien monsters, particularly since he saw one rip apart his sister (Zoe Kravitz) at a younger age. So when their spaceship crashes on Earth and Cypher's broken legs render him immobile, it's up to the lad to make his way across the treacherous landscape to locate the craft's tail end and the rescue beacon kept therein.

For a science fiction feature, After Earth proves to be anemic in both concept and execution. An ample amount of important exposition is missing (reportedly, this data will be collected in various spin-off books and video games; oh, boy!), and even what's promised on screen isn't delivered. When a character notes that Earth is now overrun by all manner of frightening creatures hellbent on killing humans, we tingle at the possibilities. So what do we get? A tarantula, an eagle, several tigers and a bunch of baboons. Those expecting the thrills of King Kong's Skull Island will be sorely let down -- heck, even those expecting the thrills of National Lampoon's Vacation's Walley World will feel cheated.

Even more than a science fiction spectacle, this film registers as a father-son tale -- and a rather dreary one at that. Working from a story suggested by Will Smith, director M. Night Shyamalan (whose career continues to plummet at Mach speed) and co-scripter Gary Whitta (who also penned the underrated futuristic saga The Book of Eli) fail to establish any sort of believable rapport between their central characters -- amazing considering they're related in real life. The screenplay posits that the lack of connection is due to Cypher's standing as a hardnose military officer and Kitai's emergence as a sensitive boy, but really, it's due to the arid dialogue between the pair as well as the shaky turns by both actors. Will Smith is of course one of our most charismatic performers, and it's more of a waste than a stretch for him to play such a dull, dry character who exhibits all the charm of a recycling bin. As for Jaden Smith, he's hardly a worthy replacement for Pop in the leading-man department, and parents Will and Jada Pinkett (who co-produced, along with Jada's brother Caleeb Pinkett) would have been better off buying him a new computer or PS3 instead of his very own motion picture.