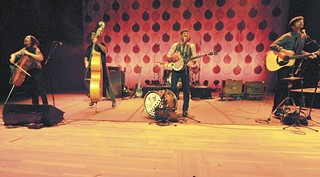 The Avett Brothers at the Mercer (SMF photo)

CELLOS ARE GREAT. I have no problem with cellos. But sometimes there's just no replacing a steel guitar.

It was during this realization, about halfway through their concert at the Johnny Mercer Theatre Wednesday night, when I had a minor epiphany of sorts: As a musical act, the Avett Brothers -- for all their twee, uber-sincere, emo-country sensibilities -- are a product of some specific, very deliberate decisions along the way.

Instead of featuring a steel guitar player -- really a no-brainer for some of the melody lines naturally emerging from their songs -- they use a cellist (the fine Joe Kwan, the Avetts' "brother from another mother"), which inhabits the same register but has infinitely more novelty appeal.

Instead of a fiddle player, one of the brothers occasionally tinkles, Ben Folds-style, on standard electric keys.

Instead of letting Seth Avett, the most talented singer of the siblings, take most of the spotlight, it's the rougher-voiced, more rock-style (grating?) vocals of brother Scott that do the heavy lifting.

Instead of remaining a purely acoustic band with no percussion, bluegrass-style -- which their music really demands -- they have a completely superfluous drummer, who provides a big boomy beat to bounce up and down to and not much else.

(Indeed, the kick drum was mixed so loudly, with so little regard for basic mixing, that -- combined with the usual airplane hangar-like acoustics of the Johnny Mercer Theatre -- whatever subtlety the Avetts themselves may have summoned up on banjo and guitar was nearly inaudible.)

These are not isolated things. They are a set of decisions that when taken together mean the difference between the Avetts performing with Bob Dylan at the Grammys and being on the cusp of millionaire status, or being just another critically-respected, little-known Americana act.

You can't say they made the wrong decisions -- they have certainly worked out very well for them. But it leaves one, or at least me, wondering what the alternative might have been....

Regardless of what I think, the Avetts have a large and devoted following of diehard fans who really enjoyed the show. I admit I'm not so diehard, which I've noticed seems to disqualify me from having an opinion on the band in the minds of some of their more ardent followers.

In any case, you don't have to be a diehard to appreciate the Avetts' scintillating, soaring songwriting skills -- to me the overriding, undeniable key appeal of the group. The songs lose nothing live, and they have real impact and beauty. For me the high point of the show was "January Wedding," a deceptively simple arrangement which was the perfect backdrop for Seth Avett's fine, understated singing voice.

While their penchant for wearing their lyrical hearts on their sleeves isn't my cup of tea -- the whole point of country lyrics is to understate, to make people read between the lines -- that's exactly why the Avetts are able to appeal to such a large and wide audience, and why they are the early 21st Century version of the Dave Matthews Band rather than simply another talented but underappreciated newgrass/alt-country band.

While the age diversity of the crowd in attendance was quite impressive and speaks very well to the Savannah Music Festival's continuing successful outreach, the core audience at the Avetts' gig was pretty much the same boorish frat-boy crowd which has ruined so many shows at the Johnny Mercer Theatre and Civic Center Arena over the last few years through their chronic rudeness and inability to handle the alcohol that the City of Savannah is only too eager to sell them.

(The same City of Savannah which routinely goes out of its way to entrap, bully, and otherwise harass privately owned alcohol-selling establishments to the point of going out of business. But I digress.)

During a truly beautiful -- I use that word with care, but it's certainly appropriate in this case -- solo turn by Seth, each and every delicate pause in the music was met with a yowl of gibberish or a rebel yell by some drunken idiot or another, desperate to take that moment for themselves rather than letting it enhance the performance onstage.

It's no fault of the Avetts or of the Savannah Music Festival, and it's certainly no breaking news flash that frat boys still suck. But this constant, over-the-top behavior is a continuing black eye for Savannah itself, and all the more of a shame considering that a few simple tweaks would reduce the copious imbibing that has made almost all shows at the Civic Center nearly unbearable for real music fans.