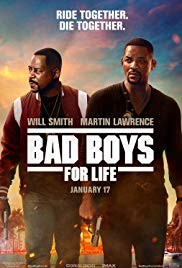 Certainly not on Bay’s filmography, as his name is nowhere to be found in the behind-the-camera credits (he does, however, make an unbilled appearance in a blink-and-you’ll-miss-him cameo). Make of this what you will, but the Bay-less Bad Boys for Life turns out to be the best picture in this high-energy franchise.

The first film came out during the Bill Clinton years and the second during the Bush Jr. regime, so that’s been plenty of time for Miami detectives Mike Lowrey (Will Smith) and Marcus Burnett (Martin Lawrence) to mature.

But while Marcus has indeed calmed down and embraced his advanced age (aided in part by the birth of his grandson), Mike still imagines himself as an unstoppable cop: bold, bulletproof, and possessed by youthful vigor. That changes after a round of bullets plants him in the hospital, where he remains in critical condition while Marcus stays by his bedside.

The identity of the assailant is initially unknown to Mike but not to audience members. He’s Armando Armas (Jacob Scipio), the son of a Mexican drug lord who was arrested by Mike back in the day and died in prison.

He’s also the offspring of Isabel Aretas (Kate del Castillo), a reputed witch who has sworn vengeance on everyone responsible for her late husband’s incarceration, from the judge to the forensics officer to Mike Lowrey.

Lowrey of course survives the shooting (otherwise, this would be an awfully short movie), and even though he’s told by his superior (returning Joe Pantoliano) to let others investigate the matter, he refuses to back down.

He’s finally allowed to serve as consulting officer on the case, but even though he expects Marcus to honor their enduring commitment of “We ride together, we die together,” Marcus has other plans — namely, retirement.

Directed by Belgian filmmakers Adil El Arbi and Bilall Fallah (billed in the credits as simply Adil & Bilall), Bad Boys for Life is a frequently funny and furiously fast-paced picture that nevertheless finds time to slow down and smell the consequences.

Hardly a mindless action flick, this one has a real feel for its two heroes and the personal dramas they endure. This also extends to the two principal villains, whose backstories expand in interesting ways as the film progresses.

The chemistry between the stars is stronger than ever, and while one expects Smith to play to his strengths as a cool and charming stud, the real surprise is Lawrence.

He grounds this film with unexpected gravitas, and he even contributes several moving moments amidst all the gunplay. I’ve generally liked Lawrence better than the movies in which he appeared (Big Momma’s House, anyone?), so it’s nice to see him in a sturdy vehicle that’s custom-made to match his talents.

Bad Boys for Life is not showing in any theaters in the area.