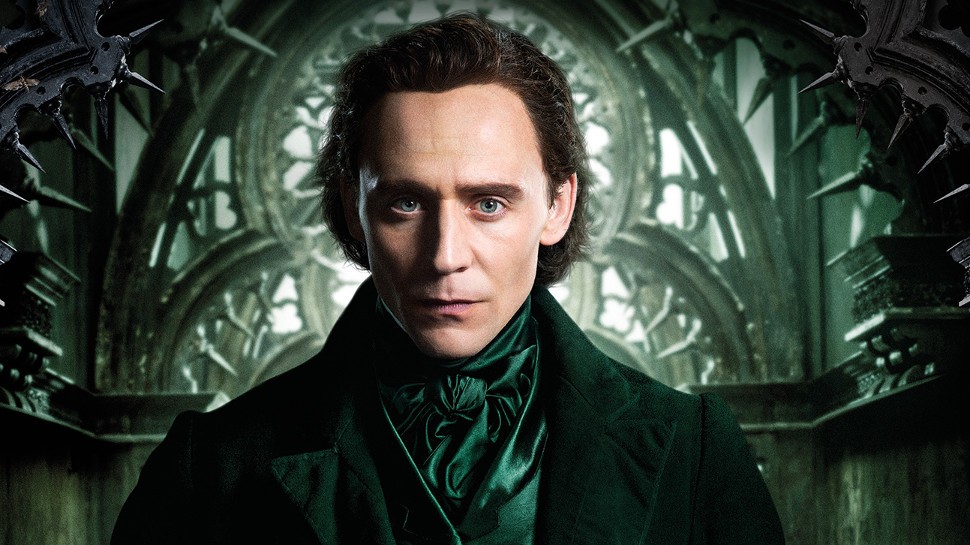 Until the arrival of writer-director Guillermo Del Toro’s Crimson Peak on the cinema scene, I don’t believe I have ever seen a supernatural flick in which the ghosts are wholly insignificant and absolutely irrelevant. In fact, take all of the spirits out of the picture and it doesn’t change the primary plot one iota.

The obvious conclusion is that Del Toro included the apparitions either because he has a reputation as a monster maker to uphold or he simply likes dabbling in CGI. Then there’s the third option, that he knew he had a feeble script on his hands and hoped to steer attention away from it via costly window dressing.

Co-scripting with Matthew Robbins (they also collaborated on 1997’s exciting Mimic), Del Toro has crafted a movie that will likely only appeal to modern moviegoers thoroughly unfamiliar with Jane Eyre or Henry James or Bluebeard or Daphne du Maurier or, heck, even The Silence of the Lambs. Mia Wasikowska, who once played Jane Eyre opposite Michael Fassbender’s Rochester, here essays the role of Edith Cushing, an aspiring novelist living in turn-of-the-20th-century Buffalo with her protective father (an excellent Jim Beaver).

Edith is visited by the ghost of her mother, who warns her to “Beware of Crimson Peak!” (Wasikowska should have heeded this advice when first presented with the script, but I digress.) Edith can make no sense of the spectral suggestion, so she proceeds with her life, which, following the lead of any young protagonist in a bildungsroman, finds her leaving home for lands unknown.

In her case, she tosses aside a colorless suitor (colorless Charlie Hunnam) for a mysterious Brit named Thomas Sharpe (Tom Hiddleston), marries this haunted man, and moves to his family home in England, where the couple will share quarters with his perpetually brooding sister Lucille (Jessica Chastain). But almost immediately upon arriving at this dilapidated, isolated estate – a house that oozes red clay from almost every orifice – Emily is exposed to all manner of inexplicable sights and sounds.

Del Toro clearly means for Crimson Peak to register as a throwback to classic films steeped in Gothic ambience, but he piles on the artifice to such an excessive degree that the entire project suffers from overbearing overkill. This is particularly noticeable in the effects work, with gore sequences that are surprisingly unconvincing and a maternal apparition that suggests Del Toro and Chastain took turns swiping footage off the set of their previous collaboration, 2013’s Mama.

With the majority of its twists easy to deduce and the rest telegraphed far ahead of time, the picture isn’t at all scary or suspenseful, but it also isn’t remotely atmospheric, a shock considering the elegance of the costume design by Kate Hawley (Edge of Tomorrow) and the richness of the production design by Thomas E. Sanders (Bram Stoker’s Dracula).

In defending her decision to write ghost stories, Edith tells a prospective publisher that the “ghosts are metaphors.” The movie’s ghosts – immaterial in both senses of the word -- can’t even aspire to that level. Del Toro should have left them to haunt the cutting-room floor; instead, he opts to have them further clutter a film that’s already wispy enough without them.

Crimson Peak and Crimson Peak: The IMAX Experience are not showing in any theaters in the area.