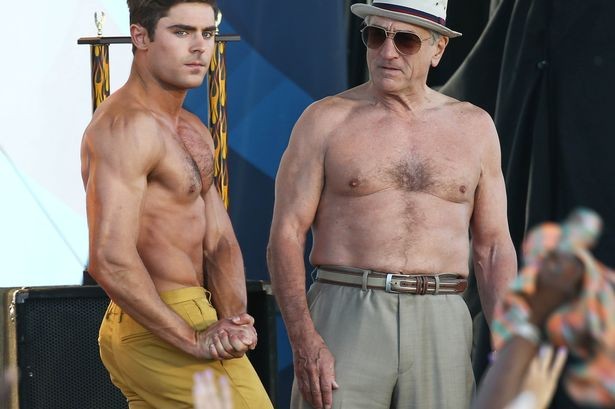 Whether he’s the one delivering the line or it’s being spoken by a co-star, it’s not unusual to find classic snatches of dialogue in a movie featuring Robert De Niro. “You talkin’ to me?” “I know it was you, Fredo. You broke my heart.” “Better to be king for a night than schmuck for a lifetime.”

And, of course, “AK-47. When you absolutely, positively got to kill every motherfucker in the room, accept no substitutes.”

De Niro appears to have hit a home run with Dirty Grandpa, as the film features at least a dozen lines destined to be remembered fondly during one of those AFI tributes at some point in the near-future.

Among the nominees: “I want you to tsunami all over my face.” “Maybe you can use your golf club to hit your balls into my vagina.” And, lest we forget, “I’d rather let Queen Latifah shit in my mouth from a fucking hot-air balloon.”

But let’s put aside the jokes for a minute – after all, the film certainly does, mixing dead-on-arrival gags with the usual late-inning faux-sincerity that seems even more miscalculated and out-of-place in a film as desperate as this one.

The plot can be discarded with one sentence: After the death of his wife, the elderly Dick (De Niro) talks his straight-laced grandson Jason (Zac Efron) into driving him to Daytona Beach during Spring Break so he can get laid.

This simple plot fuels 97 minutes of watching De Niro once again mug shamelessly, Efron once again display all the comic instincts of a dead hornet, and filmmakers once again assume that profanity and scatology are worthy replacements for wit and timing.

When the Academy elects to honor him with one of those honorary Oscars for lifetime achievement, I’m sure this clip will be nestled between those from Raging Bull and The Deer Hunter. Or maybe it will be a clip from the sequence where he’s sleeping naked and we get a close-up of his (prosthetic) penis as it rests on the pillow next to Efron’s head. Or maybe it will be the part where he uses the n word (twice!) after he’s given permission to say it out loud by black street toughs who have inexplicably grown fond of his cracker ass.

There are the usual moments of gay panic and casual sexism generally found in this sort of nonsense — incidentally, the 72-year-old De Niro’s lover in this film is played by 31-year-old Aubrey Plaza, because why not? — but it’s the line involving Queen Latifah (mentioned at the top of the review) that’s queasy after reading between the lines.

Why would such a nasty image be conjured at the expense of Queen Latifah, hardly a figure worthy of malicious intent? Could it be because she’s black and overweight? Hilarious!

Personally, I would have made someone worthy of such contempt – say, Donald Trump or Sarah Palin – the target, but they’re white and not overly large so I guess scripter John Phillips didn’t feel that was funny enough.

Admittedly, I did smile a couple of times over the course of the film. I don’t remember the scenes – apparently, they weren’t that memorable – but I do remember smiling. I’m fairly certain it wasn’t during any of the sequences featuring the astonishingly irksome Jason Mantzoukas as an amiable drug dealer named Pam.

I’m likewise pretty sure it wasn’t during the scene in which a dad thinks a naked Efron is sexually molesting his 4-year-old son.

And I’m certain it wasn’t during the countless times that De Niro sticks his finger up Efron’s ass. Then again, that last-named is the only way a movie as awful as Dirty Grandpa will receive a thumbs up.