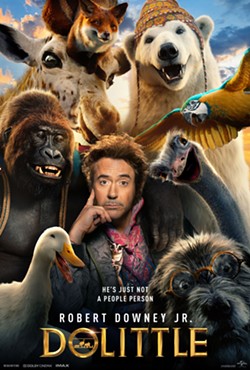 Members of the Hollywood Foreign Press Association (aka givers of Golden Globes) have long been accused of exchanging votes for favors, but the members of the Academy of Motion Picture Arts and Sciences have also been found guilty of similarly sleazy behavior. As Exhibit A, consider 1967’s Doctor Dolittle, a poor musical that bombed with both audiences and critics.

Nevertheless, as part of the For Your Consideration campaign, the suits at 20th Century Fox sent out an in-house memo that read, “Each screening will be preceded by champagne or cocktails and [followed by] a midnight buffet supper. Doctor Dolittle is the studio’s prime target for Academy Award consideration.”

The offer of free food worked beautifully, and Academy voters shamelessly nominated this debacle for Best Picture (thereby rubbing shoulders with the landmark likes of The Graduate and Bonnie and Clyde).

When it comes to Dolittle, the third film adaptation based on the children’s books by Hugh Lofting (the second was a tepid Eddie Murphy vehicle from 1998), I expect that not even the promise of ownership of a small Caribbean island could entice Academy members to vote for this dismal dud (then again, following the absurd bestowing of 11 nominations on the ridiculous Joker, I wouldn’t put anything past these easily swayed voters). Somehow, this version manages to be even worse than the ’67 model — a remarkable achievement, really.

Stepping into the role previously essayed by a bored Rex Harrison and an animated but ineffectual Murphy is Robert Downey Jr., offering a stark contrast to his Tony Stark/Iron Man from his MCU years. Speaking in a Welsh accent that resides somewhere between Richard Burton and Anthony Hopkins, Downey begins the film donning a fright beard and spraying spittle as he talks to the animals via a series of grunts, growls and grimaces — not even Rowan Atkinson as Mr. Bean ever mugged this much.

The plot involves Dolittle’s efforts to save the life of an ailing Queen Victoria (Jessie Buckley, so ill-used that they might as well have propped up a mannequin in her place). It turns out that she is slowly being poisoned by two members of her trusted staff (Michael Sheen and Jim Broadbent), and so Dolittle, his young apprentice (Harry Collett), and his entourage of animals must venture to a mythical island to retrieve a fruit that can save her.

Directed and co-written by Stephen Gaghan, who won an Oscar for scripting Traffic and earned another nomination for penning Syriana (because those are certainly two credits that suggested he could helm a big-budget kiddie flick), Dolittle was originally set to be released in April 2019 before poor test screenings resulted in a handful of rewrites and reshoots.

The finished product before us doesn’t suggest that this version is any worse than the previous incarnation; it instead suggests that, instead of wasting more money on a film that already cost them an astounding $175 million, the suits at Universal merely threw up their hands and opted to cut their losses by releasing whatever footage was available and assembled.

It’s impossible to believe that Dolittle can be enjoyed by anyone whose age is measured by double rather than single digits. Despite the gargantuan price tag, this is a visually ugly movie, always busy in filling the screen with a swirl of colors and effects but never managing to engage the senses in any positive manner.

This film should offer children innocence and imagination; instead, one of its major set-pieces finds Dolittle extracting a bagpipe from a dragon’s behind and then being hit so hard by the escaping flatulence that his hair is blown all asunder.

Most of the actors cast as the human characters play their roles as buffoons, which makes Antonio Banderas’ take on the project baffling (if appreciated). As a pirate king, the freshly Oscar-nominated actor delivers a sincere and heartfelt performance, making one wonder if he was handed the right script.

As for the thespians voicing the animals, most fail to make much of an impression (Emma Thompson as a parrot, Tom Holland as a dog, Marion Cotillard as a fox) while others are either annoying (Jason Mantzoukas as a dragonfly, Kumail Nanjiani as an ostrich) or utterly nondescript and thus unsuited for voice work (Rami Malek as a gorilla, John Cena as a bear).

First Cats, and now this? Perhaps there ought to be a temporary ban on CGI-slathered movies featuring talking animals — like children, they apparently should be seen, not heard.