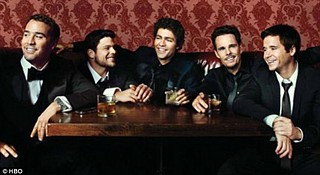 There’s always a perverse pleasure to be gained when a character in a fictional movie writes a book, or sings a song, or delivers a performance, and while everyone else on screen is declaring its brilliance, we in the audience, treated to a brief snippet, are laughing at its sheer awfulness. Such a scenario unfolds within the parameters of Entourage, the big-screen continuation of the long-running (2004-2011) HBO series loosely based on Mark Wahlberg’s early years.

Ari Gold (Jeremy Piven), having ascended from being an agent to becoming a studio head, wants actor (and Wahlberg stand-in) Vincent Chase (Adrian Grenier) to star in his upcoming movie Hyde, an expensive update of Robert Louis Stevenson’s Strange Case of Dr. Jekyll and Mr. Hyde. Backed by his trio of buddies/co-workers/sycophants E (Kevin Connolly), Turtle (Jerry Ferrara) and half-brother Drama (Kevin Dillon), Vincent agrees, but only if he can also make his directorial debut with the feature.

Ari reluctantly agrees, and soon he’s overseeing a project that’s far behind schedule and way over budget. Ari and other studio bigwigs are anxious to see at least a rough cut of the picture, and they finally get a chance...as do we.

The footage, featuring Vincent playing a Hyde who’s some sort of futuristic dubstep DJ orchestrating a skirmish between clubbers and cops, looks jaw-droppingly awful, with Vincent coming across like some rejected Avengers villain or, as my lil buddy Adam stated, some heretofore unseen Sith Lord (Darth Ludicrous, perhaps?).

The footage is so risible, in fact, that it makes the recent bomb Jupiter Ascending look as phenomenal as Blade Runner or 2001: A Space Odyssey in comparison. In the real world, it’s doubtful even Paul Blart groupies would turn out for this nonsense, but in the vacuum-sealed world of Entourage, it naturally promises to be a critical and commercial smash.

Indeed, such stunning lack of self-awareness is the constant stream running throughout this smug, self-satisfied picture, which is saved from total disaster by some clever Hollywood-insider digs but which otherwise asks us to spend an inordinate amount of time with a group of insufferable lunkheads, the sort that most of us try to avoid in social situations.

Without exception, these doofuses are ripe for a comeuppance, or a putdown, or a hard lesson learned, but whenever it looks as if someone might actually, you know, grow or at least enjoy some sort of character arc—generally helpful ingredients in motion pictures, so as to prevent narrative stagnation and dramatic flatlining—creator-writer-director Doug Ellin (scripting with Rob Weiss) pulls back and ends up letting boys be boys, or putting bros before hos, or whatever the manly meme this week might be. Nowhere is this more evident than in the character of Drama, a misogynistic creep prone to making declarations like, “[A relationship’s] not fun. What’s fun is forgetting a chick’s name while you’re fucking her.”

In a slasher flick, Drama is the type of character who would be the first to go; in a high school rom-com, he would be the only one at movie’s end without a girlfriend; in a crime movie, he would be the snitch who gets garroted by Ray Liotta. Here, he’s basically the glorious hero, the Indiana Jones of a-holes, the Luke Skywalker of d-bags.

Not helping matters is the fact that Dillon has always possessed the acting chops of an avocado. Equally difficult to take is Grenier, who’s supposed to be this magnetic A-list movie star but whose listless performance suggests that Vincent would even have trouble landing a gig as announcer at an Illinois hog-calling competition. Connolly and Ferrara fare better as, respectively, E and Turtle, with Ferrara especially ingratiating in the moments when he’s trying to romance MMA star Ronda Rousey (playing herself).

And then there’s Piven, a motor-mouthed wiz who best knows how to swing around all the Tinsel Town jargon. His scenes are often the best since they focus more on the business end and provide a respite from the boorish behavior of the other guys. Other familiar faces from the show pop up here and there (Debi Mazar, Martin Landau, etc.), and of course there are more celebrity cameos than there are stars in the night sky. Some are amusing (Gary Busey), some are not (Liam Neeson), but true to form, they almost all belong exclusively to the men’s club: Armie Hammer, Tom Brady, David Spade, Kelsey Grammer, Mike Tyson, Jessica Alba, Andrew Dice Clay, Jon Favreau, Bob Saget ... wait, Jessica Alba? How did she slip by, and does Mark Wahlberg know