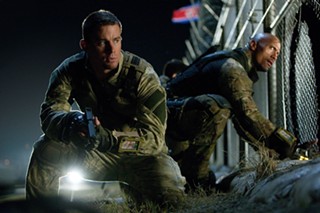 Released in the waning weeks of the summer of 2009, after Transformers: Revenge of the Fallen had done the Hasbro brand (although not cinema itself) proud with its blockbuster grosses, G.I. Joe: The Rise of Cobra, likewise based on a Hasbro line of toys, was a sizable enough hit to guarantee that a sequel would eventually hit the screen. It was also putrid enough to join the aforementioned Michael Bay eyesore on my list of the year's worst films - as I wrote in my review, "This isn't G.I. Joe so much as it's C.G.I. Joe, a nonstop orgy of computer imagery and pretty much what we'd expect from the director of the execrable Van Helsing and two dopey Mummy movies."

G.I. Joe: Retaliation is that inevitable sequel, and the good news is that it's a definite improvement over its predecessor. For whatever reasons, director Stephen Sommers and the five(!) writers of the original have thankfully not returned for a second tour of duty, with the responsibilities now falling to Jon M. Chu (helmer of the Step Up sequels) and Zombieland scripters Rhett Reese and Paul Wernick. Channing Tatum, star of the first film, does return, although he basically has a glorified cameo. He again plays Duke, the elite military man who takes his team into Pakistan for what turns out to be an ambush that leaves practically all of the soldiers dead. Among the only survivors is second-in-command Roadblock (Dwayne Johnson), and he's determined to find out who's behind the sabotage. That would of course be the members of the nefarious organization Cobra, who need all the Joes out of the way so they can get started on that whole "world domination" gig. Yet not all of the Joes were on the ill-fated Pakistani mission, meaning Roadblock and his motley crew can expect help from their colleague Snake Eyes (Ray Park) and his apprentice Jinx (Elodie Yung) - to say nothing of the retired general (Bruce Willis) who, as Roadblock explains, is why they're all called Joes in the first place.

The establishing banter between best buds Duke and Roadblock is agonizing, so the action in this movie can't arrive fast enough. When it does, it suggests that Chu is working from a Jekyll & Hyde dichotomy, with the good action sequences (most notably a superb ninja showdown unfolding on mountainsides) repeatedly giving way to the bad ones (chiefly, any sequence that sacrifices clarity and spacial relations for the sake of fast edits and blinding explosions). The entire movie basically operates in such a yin-yang manner, ricocheting between interesting characters and idiotic ones, between clever plot developments and ludicrous ones, between smart dialogue and - wait, scratch that; there is no smart dialogue, just marble-mouthed monologues and limp quips.

Johnson again demonstrates that he's one of the few action stars of today able to believably hold the screen, but the presence of Willis only accentuates the fact that he's become a lazy caricature of himself, as much of a heroic burnout as Stallone and Schwarzenegger. Still, it's easier to take 30 minutes (tops) of the actor in paycheck-snatching mode in this film than 110 minutes of him similarly going through the cash-grab paces in A Good Day to Die Hard, so add that to G.I. Joe: Retaliation's win column as well.