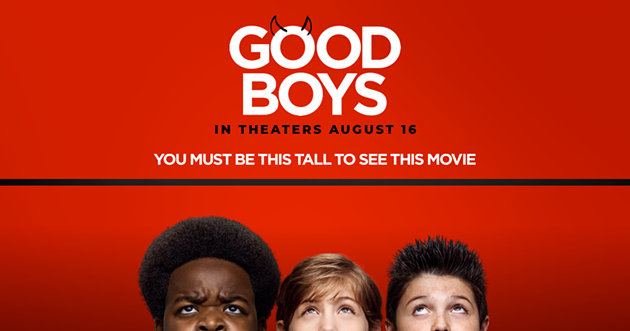 
A late-summer bookend to the early-summer Booksmart, Good Boys may not match the earlier picture’s overall excellence but gives it a decent run in the humor department.

Frequently raunchy and rude, the film focuses on the awkward exploits of three best friends who call themselves The Bean Bag Boys (because, as they needlessly explain to everyone, they once all owned bean bags). Sixth grade chums Max (Room’s Jacob Tremblay), Lucas (Keith L. Williams) and Thor (Brady Noon) do everything together, so when Max gets invited to a party being held by the cool kids, he manages to obtain permission to bring along his decidedly less mature buddies.

Max wants to attend the so-called “kissing party” since the cute Brixlee (Millie Davis) will be there; however, first things first, so Max has to learn how to properly smooch a girl.

An attempt on a CPR dummy doesn’t quite work out, so Max et al decide to spy on teenage girls Hannah (Molly Parker) and Lily (Midori Francis) via the use of a drone owned by Max’s dad (Will Forte).

When said drone gets damaged, the boys set out on a journey to replace it; along the way, they’re forced to contend with doofus frat boys, an overworked cop (Sam Robinson), and the realization that the bonds that once held them together might now be fraying.

Like Booksmart, Good Boys follows its protagonists as they embark on a journey (both mentally and physically) whose ultimate destination isn’t the promised good time as much as it’s self-awareness. Good Boys may not dig as deep as the previous picture, but there’s still sincerity to be found in its life lessons involving growing up and growing apart.

Of course, such sobering reflections are reserved for late in the game; for the most part, the picture is happy to remain focused on its ribald gags, many of which are uproarious.

Writer-director Gene Stupnitsky and co-scripter Lee Eisenberg mine a lot of humor out of their premise, not all of it R-rated. A moment when someone ridiculously states that Lucas could pass as a college-age kid receives an amusing payoff in a later moment that’s practically a throwaway bit.

Lucas’ penchant for always telling the truth also results in some worthy guffaws, as does Thor’s tendency to blurt out whatever’s on his mind (when Lucas sadly states that his parents are getting a divorce, Thor asks, “Why, what did you do?”).

Some of the more risqué passages might leave some adults (particularly parents) fidgeting, but it’s all in good fun. Indeed, the only folks who have any reason to be angry are those who earlier caught the film’s red-band trailer, which idiotically included the very last scene of the film.

Jeers to whoever put together that coming attraction; let’s just be thankful they presumably weren’t around 20-odd years ago when the trailers for The Usual Suspects and Seven were being constructed.