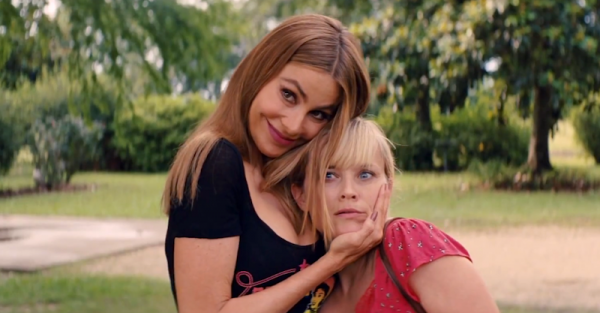 There was a stretch during the 1980s when a rash of bad buddy comedies teamed the most unlikely and incompatible of partners, as if the pairs had been chosen by random spins on a wheel of misfortune. Pat Morita and Jay Leno in Collision Course. Ted Danson and Howie Mandel in A Fine Mess. Rebecca De Mornay and Mary Gross in Feds. James Belushi and John Ritter in Real Men. Joe Piscopo and Treat Williams in Dead Heat. Joe Piscopo and Danny De Vito in Wise Guys. Oh, hell, Joe Piscopo and anybody.

Hot Pursuit whisks us back to that ‘80s mindset by putting together Reese Witherspoon and Sofia Vergara. The result goes well beyond oil and vinegar—it’s more like ketchup and Frosted Strawberry Pop-Tarts. Witherspoon plays Cooper, a Texas cop whose legendary blunder out in the field has since kept her behind the desk in the precinct evidence room.

She’s finally given a chance to redeem herself when she’s tasked with protecting Daniella Riva (Vergara), the wife of an informant, as they travel to Dallas for the trial of a powerful cartel head (Joaquin Cosio).

But matters go astray once corrupt cops show up on the scene, and the constantly bickering Cooper and Daniella must put their vast differences aside in order to stay alive. Along the way, Daniella makes fun of Cooper’s granny panties, Cooper disguises herself as a Justin Bieber lookalike, and the two discuss the sexual move known as “the pirate hook.”

Viewers who sit through Hot Pursuit might occasionally feel as if they themselves are on the receiving end of one of those “pirate hook” maneuvers. The main perpetrators would be Anne Fletcher, who directed such flatliners as 27 Dresses and The Guilt Trip, and TV-born-and-bred scripters David Feeney (primarily the James Belushi sitcom According to Jim) and John Quaintance (mainly the Matt LeBlanc sitcom Joey).

The participation of Fletcher accounts for the film’s erratic pacing while the presence of the latter pair explains the boob-tube beats surrounding the would-be laughs. There are a few genuinely funny bits scattered around the picture and, given the lameness of the majority of the gags, their arrivals prove to be as startling as when Norman Bates swiftly pulled that shower curtain aside and began stabbing Marion Crane.

Most of these moments that do work owe their heartiness to Witherspoon, who often rises above the tired nature of her role (a female cop who’s a klutz on the job and a failure on the dating scene).

It’s easy to peg Vergara as a TV star because she delivers the type of broad performance often seen when a small-screen player hits the big screen. She’s all oversized gestures, oversized emotions, oversized enunciation—in a word, she’s terrible.

Witherspoon, on the other hand, draws upon the comedic chops that sustained her back in the days of Election and Legally Blonde, before she became a serious, Oscar-winning actress. She’s superb at drama, of course, but it’s nice to see her playing loose and funky once again. It’s just a shame it has to be in a movie as criminally bankrupt as this one.

Hot Pursuit is not showing in any theaters in the area.