ONE could make the case that our postmodern, narcissistic, reality TV, 24-hour cable news existence began in 1994 with two media sensations that in and of themselves weren’t that important, but which riveted the attention of the globe.

The O.J. Simpson trial is the most remembered of the two, of course. But right before O.J.’s white Bronco sped down that L.A. freeway, the Tonya Harding/Nancy Kerrigan figure skating scandal had reached its denouement. And nothing else was the same afterward.

Directed by Craig Gillespie and centered on an Oscar-caliber performance by Margot Robbie in the title role, I, Tonya is a pitch-perfect homage to the era, to “the incident” as its called in the movie, and to Tonya Harding herself. 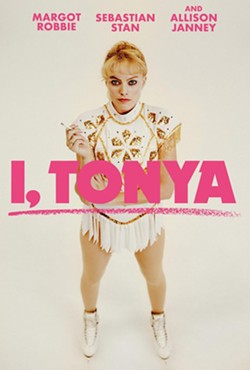 Anyone around at the time remembers the trope: “White trash” Oregon girl with off-the-charts athletic talent competing against the “Ice Princess” Nancy Kerrigan, a prim and proper image of what the sport considered its feminine archetype.

As the film points out, the networks couldn’t get enough of the ratings bonanza and were more than happy to play up the insane events surrounding the two.

However, I, Tonya, as the title indicates, focuses more on the circumstances which led to her rise and fall. Her verbally abusive, cold and uncaring mother (portrayed with savage humor by Allison Janney in what is sure to be another Oscar-nominated performance) and her physically violent, manipulative husband Jeff Gillooly (played with understated excellence by Sebastian Stan) combine to make the perfect storm for Harding’s dysfunctional behavior.

As we see, Harding’s biggest mistake wasn’t in having anything to do with the knee-bashing “incident,” but in believing all the destructive, humiliating messages sent to her by those closest to her, in verbal and physical fashion. It’s not hubris, but her own lack of self-worth, which leads to her downfall.

Robbie skillfully embraces the skater's vulnerability without ever showing her as pathetic; Harding's innate competitor’s pride and defiant spirit remain throughout, and that’s what always made Harding such a compelling figure.

There are enough laughs in the film to qualify it as a straight-up comedy rather than a mere biopic. Thankfully, the film refrains from satirizing its subject and seeks to make no larger sociopolitical point; rather most of the comedy comes from the quirky characters themselves.

Of note is Paul Walter Hauser’s performance as the full-of-crap “bodyguard” Shawn Eckhardt, whose delusional idiocy is behind the idea to attack Kerrigan at an Olympics qualifier in Detroit.

A particularly brilliant decision in the film has to do with the soundtrack. Most of the many vintage tunes you hear in the movie aren’t from the late ‘80s and ‘90s at all – when most of the actual plot happens – but from the decade prior when Harding was growing up dirt-poor in Oregon (think Heart’s “Barracuda,” Foreigner’s “Feels Like the First Time,” etc.)