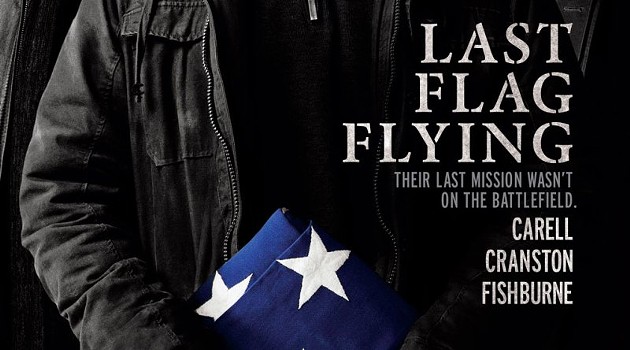 With such titles as Dazed and Confused, Everybody Wants Some!! and the masterful Before Sunrise/Sunset/Midnight trilogy, writer-director Richard Linklater has spent the majority of his career focusing on the experiences of the young and the restless.

Last Flag Flying leaps so far in the opposite direction that it’s almost startling to see his name appear in the credits. In this picture, the central characters are more likely to carry AARP cards rather than the fake IDs required of past Linklater protagonists.

Last Flag Flying will certainly stir memories of the 1973 Jack Nicholson vehicle The Last Detail, and that’s no accident. Both films are based on novels by Darryl Ponicsan, and the author himself co-scripted this new picture alongside Linklater. Set in 2003, it focuses on Larry “Doc” Shepherd (Steve Carell), a Vietnam War veteran whose only child has just been killed in the Iraq War.

Before traveling to claim the body, he asks two fellow grunts he hasn’t seen in approximately 30 years to accompany him on his road trip. Both Sal Nealon (Bryan Cranston), now a coarse bar owner, and Richard Mueller (Laurence Fishburne), long a respected reverend, say yes.

What follows is a journey that hits most of the expected beats, with Richard loosening his holy collar, Sal exhibiting flashes of restraint and sensitivity, and Doc coming to grips with the death of his son.

All three actors are predictably excellent, with further notable turns by J. Quinton Johnson as Charlie Washington, a young Marine assigned to accompany the three men as they make burial arrangements for Doc’s son, and the great Cicely Tyson (looking fabulous at 92) as Mrs. Hightower, the grandmother of a soldier whose death in Vietnam remains a troubling link between the trio.

Indeed, the characters’ memories of Vietnam commingle easily with the film’s Junior-Bush-league setting. Doc, Sal and Richard all love their country but hate the ever-changing governments that perennially view young Americans as expendable fodder, and the three men can’t help but chuckle as they hear Washington (who served with Doc’s son in Baghdad) repeat the gung-ho speeches they themselves heard 30 years earlier. Last Flag Flying is proudly pro-soldier and anti-war, and real American patriots will grasp it at once.

Last Flag Flying is not showing in any theaters in the area.