Review: Life of The Party 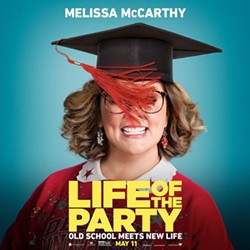 LIFE OF THE PARTY

Melissa McCarthy exploded as a screen comedienne thanks to her projects with filmmaker Paul Feig – among them her Oscar-nominated turn in Bridesmaids, her knockout performance in the wickedly clever Spy, and her robust work in the satisfying Ghostbusters remake.

Yet in the two previous pictures she made with husband Ben Falcone, she was sourced with material far beneath her abilities — a surprise, since she herself co-wrote both films with her hubby. So it’s gratifying to report that Life of the Party, her latest collaboration with Falcone, is far superior to their dismal twofer of Tammy and The Boss.

Much of the picture’s appeal rests with the character essayed by McCarthy. Like Rodney Dangerfield’s Thornton Melon in the 80s comedy classic Back to School, McCarthy’s Deanna is immensely likable, meaning viewers have her back as she rebounds from a deserting spouse (Matt Walsh) by heading back to college to belatedly earn her degree in archaeology.

Whereas the scripting team of McCarthy-Falcone populated Tammy and The Boss with nothing but dreary characters, they fare better here, creating interesting roles that are filled out by engaging actors (including Molly Gordon as Deanna’s daughter, Luke Benward as Deanna’s smitten boy-toy on campus, and especially Gillian Jacobs as an eccentric student recently awoken from a coma).

To be sure, much of Life of the Party is trite, derivative and/or simply stupid — the “VaGoogle” scene, for instance — and the picture eventually wears out its welcome (particularly when a music superstar shows up, playing herself). Yet it’s nice to see McCarthy and Falcone giving this that old college try – and almost pulling it off with honors.

Life of the Party is not showing in any theaters in the area.