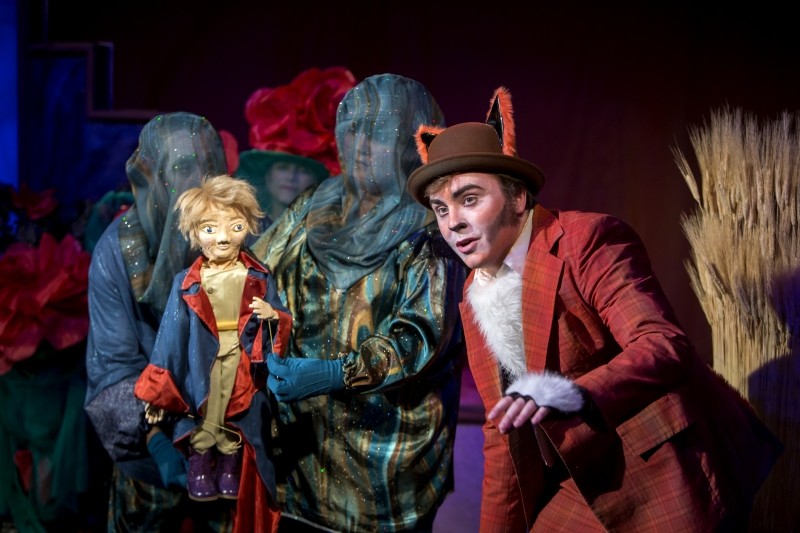 The Little Prince continues the next two weekends at Muse Arts Warehouse. For reservations call 912.232.0018

I CHECKED out Antoine De Saint-Exupery's timeless novella from my school library in 5th grade. It was a middle school level book, and I scored some major Accelerated Reader points upon completing it.

I remember telling my mother that it was a surprisingly easy read, and her explaining to me that perhaps it was the message, not necessarily the reading level, that was meant to challenge.

When I spoke with Director David I.L. Poole about The Little Prince a few weeks ago, he explained The Little Prince’s like this: “Children see it at one level—they understand it on some levels better than adults—but adults understand from a different perspective, because they’ve had lessons that children have not.”

It seems there were some complexities in the narrative that went entirely over my ten-year-old head, because I simply was not ready for the scope of emotions that a small puppet, voiced by Vanessa Stipkovits, and Christopher Blair were about to pull from me last Friday night.

Honestly, puppetry can give me the heebie-jeebies, but by the end of a devastating and downright lovely performance, I had tears in my eyes.

Blair is, unsurprisingly, incredible as The Aviator. His character’s transformation from guarded, bitter adult into vulnerable human is both captivating and tender. Most impressive, however, is his ability to carry such meaningful dialogue with the Prince; it sells their bond and acts as the heart of the performance.

It’s my understanding that this was one of Blair’s first experiences with puppetry, and his Aviator’s endearing connection with the Little Prince broke the barrier and truly brought the puppet to life.

The chorus, Stipkovitz, and the two additional puppeteers tending to the Prince, draped and masked in shining, flowing costumes, added a new kind of grace and elegance to the stage, ushering in planets for the Prince to perch upon, steering stars through the night sky, and more.

I was surprised, at first, by Stipkovitz’s voicing of the Prince; with Saint-Exupery’s writing—deep lessons on loss of innocence wrapped in simple delivery—I expected a meek, gentle, yet childlike timbre. Stipkovitz’s Prince is sharp and childlike in its persistence.

When the Aviator first meets the Prince, the Prince is a little demanding, admittedly odd, and annoys the Aviator with his insistence; as the Prince perched on Blair’s shoulders, I couldn’t help but think of Yoda on the shoulders of Luke Skywalker, speaking large, cryptic lessons to an impatient and distracted Skywalker.

I—and the audience—quickly fell in love with the delightful Prince and his insight.

With its close attention to fantasy-fueled landscapes, wonderful puppets, and cleverness, The Little Prince is sure to be a hit with kids. With its call for humility, vulnerability, and wonderment, it’s sure to make the adults in the audience feel a certain kind of necessary ache.