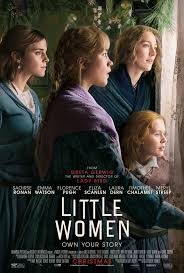 Just how strong is Little Women, the latest adaptation of Louisa May Alcott’s immortal 1868 novel? In tinkering around with the original text, writer-director Greta Gerwig has made one miscalculation that could have proven disastrous.

Yet the other elements of the film are so immaculate that it’s relatively easy to sweep this flaw under the carpet.

Gerwig’s bold decision was to tell the story in non-linear fashion, with ample flashbacks and flashforwards. But it’s an unnecessary approach, not only because the sudden shifts in years occasionally require rapid viewer reorientation (those not up to speed will find some moments confusing and not easily identifiable on the timeline) but because Alcott’s original tale needs no lily-gilding since it’s the very maturation of the characters, related in a chronological manner, that provides much of the joy.

Gerwig’s jumbled storytelling thankfully doesn’t cripple appreciation of what the title heroines accomplish, but it also doesn’t help in any discernible way.

Aside from this snafu, this is a triumphant retelling of a book that’s been brought to the screens (both big and small) on approximately a dozen occasions, the first arriving 102 years ago. There was one 1930s version with Katharine Hepburn and a 1940s take with Elizabeth Taylor, but the best version — even with the arrival of this new edition — remains Gillian Armstrong’s 1994 interpretation, with Winona Ryder absolutely perfect as Jo March.

Here, it’s Gerwig’s Lady Bird star, Saoirse Ronan, who tackles the role of Jo, the headstrong sister who values her independence above all else and hopes to make her mark as an accomplished author. She’s in sharp contrast to her more traditional siblings, all of whom nevertheless carve out their own individuality: the marriage-minded Meg (Emma Watson), who believes it’s important to behave as society dictates; Beth (Eliza Scanlen), the kindest of the sisters and also the most withdrawn; and Amy (Florence Pugh), the bratty youngest girl whose selfishness eventually falls by the wayside.

They all live with their mother Marmee (Laura Dern) while their father (Bob Odenkirk) is off to war (the Civil, to be exact). Occasionally, they have to endure visits from their busybody aunt (Meryl Streep).

Resplendent in most regards, Little Women is a movie in which each vignette rings with vitality and purpose. The theme of sacrifice looms large over the proceedings, whether it’s the March sisters sharing their food with the less fortunate, Jo writing for profit, or Beth uniting the family in the most tragic way possible.

Laurie (Timothee Chalamet), the well-to-do lad who becomes Jo’s BFF before irreconcilable desires separate them, is alternately annoying and irresistible, what with his rakish charm, aimless lifestyle, and sharp-tongued candor.

And Jo’s literary aspirations are afforded as much prominence as her home life, and the scenes in which she spars with a prominent publisher (Tracy Letts) are among the movie’s most satisfying.

Thomas Newman’s score for the ’94 Little Women was one of the great soundtracks of its decade, and it’s interesting how Alexandre Desplat weaves notes from Newman’s achievement into his own melodious music (for his part, Newman has also composed the best score for this year, the somber and haunting one that graces 1917).

Other tech credits are equally impeccable, particularly the art direction that offers the proper contrast between the humble March residence and the neighboring Laurence estate (Chris Cooper is suitably soft-spoken as the kindly Mr. Laurence).

As a writer, as a director, and as an actress, Gerwig has always displayed a modern sensibility — it’s hard to imagine the star of Frances Ha and the filmmaker behind Lady Bird venturing into period-piece territory. Yet her efforts on this picture benefit from such a viewpoint, as her approach provides structural support to the feminist tendencies Alcott exhibited in her works. Little Women mixes the classic with the contemporary, a strategy that pays respect to the ageless original.