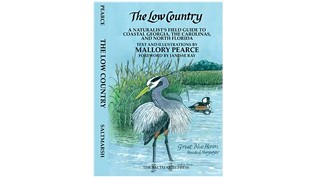 Mallory Pearce, who returned to his boyhood home on Tybee Island in 1990 after 35 years of creating animated educational films in Los Angeles, is the island’s best known naturalist.

Some say Pearce, who promoted ecological preservation while serving as a Tybee city councilman, never saw a tree he didn’t feel compelled to hug.

He developed his love of the environment while roaming around  Tybee and Oatland Islands as a teenager, then studied under and became a disciple of Eugene Odum at the University of Georgia prior to receiving his B.S. in ecology from the University of Chicago and M.A. in film making at UCLA.

A talented calligrapher and accomplished illustrator and artist, Pearce has long been enamored of the writings of Henry David Thoreau and, like Thoreau, kept his own journals for years.

Now he has mixed the information from those journals along with his extensive ecological background, multi–faceted artistic talent and true love of nature into a delightful new book.

The Low Country: A Naturalist’s Field Guide to Coastal Georgia, the Carolinas, and North Florida, published by The Saltmarsh Press and featuring a foreword by noted conservationist Janisse Ray, should prove to be a valuable companion for both serious naturalists and anyone who simply enjoys an occasional walk in the park.

It is filled with meticulous and delightful illustrations of flora and fauna which are native to or simply passing through the coastal area.

The book is also chock full of detailed information about land and sea life, including virtually anything you can find on the beach, in the woods and fields and throughout both salt and freshwater marshes.

Are you interested in swifts, swallows, cormorants, anhinga, egrets or herons? They, along with dozens of other birds, are in the book along with descriptions of their mating and nesting habits and how they feed their young.

Fresh and saltwater reptiles, including turtles, snakes and alligators, are also included, along with more information than you can shake a stick at about trees, plants, fruits and flowers.

Accompanied by this book you can plop down on any beach; beside any stream, pond or swamp, or in the middle of any field or forest in the area and quickly feel surrounded by old friends as you check the information it contains about them.

But even if you are not an avid reader, you’ll be smitten with the beautiful illustrations. These are works of art and the real treasures to be found in Pearce’s new book.