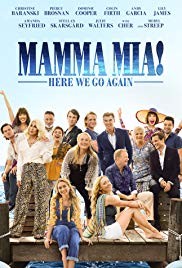 The overlapping section in the Venn diagram that represents Kurt Cobain and me is probably pretty small, but that sliver of shaded area definitely contains the tidbit that both of us are fans of ABBA. We’ll of course never know what the Nirvana headman would have thought of the 2008 screen adaptation of the smash stage musical Mamma Mia!, but I for one was devastated with what turned out to be a major disappointment.

Leadenly directed by Phyllida Lloyd (see also the gruesome The Iron Lady), Mamma Mia! featured a bright performance by Meryl Streep as Donna but was crippled by off-key singing, clumsy choreography, and editing that appears to have been attempted with a particularly dull butter knife.

Pierce Brosnan, Colin Firth and Stellan Skarsgård ably handled acting duties as the three men in Donna’s life, one of whom was the father of her daughter Sophie (Amanda Seyfried), but their singing left much to be desired. (I expect it was Wikipedia’s employment of this quote from my review that led to my receiving a heavy volume of negative feedback from the film’s fans: “Brosnan looks physically pained choking out the lyrics, as if he's being subjected to a prostate exam just outside of the camera's eye.”)

Still, Mamma Mia! made an astounding $615 million worldwide (in the UK, it was second only to Avatar as the highest grossing film of all time, since falling to #11), meaning that a wholly unnecessary sequel was eventually going to hit the screen.

So the shock is that the unavoidable Mamma Mia! Here We Go Again is actually a worthy follow-up, and perhaps the biggest out-of-left-field-stealth-missile surprise of this summer. It outshines the original in virtually every department, with better singing, better dancing, and better humor.

While much of the new film centers on the attempts of Sophie to open a hotel on the Greek island of Kalokairi in honor of her mom, the focus is on flashback sequences that reveal how a young Donna (Lily James) not only came to Kalokairi but also how she became involved with the three men who would each capture a part of her heart.

It’s difficult for any actress to “play” Meryl Streep — even her own daughter Mamie Gummer came up short in 2007’s Evening — but James proves to be splendid in the role. Best known as Branagh’s Cinderella and Baby Driver’s girlfriend, James may not look like Streep but manages to nail the joie de vivre spirit that flows through Donna at every point of her life.

It’s a delightful performance, yet she would be acting in a vacuum were it not for the equally engaging turns by the guys playing the young Brosnan (Jeremy Irvine), the young Firth (Hugh Skinner) and especially the young Skarsgård (Josh Dylan).

The generosity of Mamma Mia! Here We Go Again extends even to the small parts, with the matronly keeper of a Greek bar and a local customs officer granted their own moments to amuse.

And if the late arrival of Cher as Donna’s mom isn’t the socko finale we had desired (Bette Midler would have been a better choice for this part), it’s sturdy enough to put the finishing touches on this summer’s most raucous party.