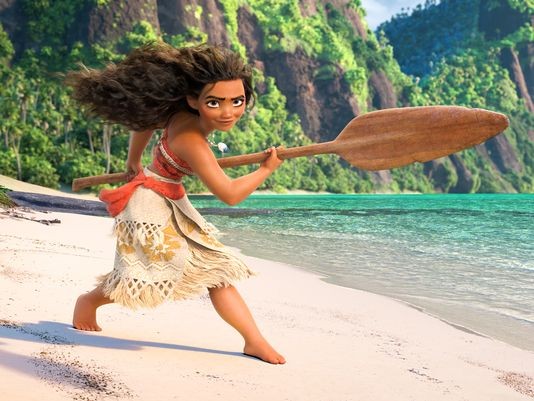 Better than Finding Dory but not quite reaching the level of Zootopia, the latest Disney animated effort of 2016 adheres pretty much to the formula we’ve come to expect in recent years from the storied studio. And as usual when it comes to the Mouse House, the formula won.

Again combining a fairly standard morality tale with eye-popping visuals, Disney has another hit in Moana, a rollicking yarn centered on a young lass (voiced by Auli’i Cravalho) coming of age on a South Pacific island.

Enjoying a special rapport with the ocean, she finally defies her overprotective father’s orders and sets sail with the intention of finding the Heart of Te Fiti (not to be confused with Titanic’s Heart of the Ocean), a bauble swiped from an island goddess by the boisterous and self-satisfied demigod Maui (Dwayne Johnson).

Requiring the return of the stone to save her endangered island, she eventually crosses paths with Maui, and the pair constantly bicker as they embark on a series of adventures. One involves tiny pirates who might be distant relatives of the Minions; another focuses on a monstrous crab who belts out a showstopper (it’s a perfect vocal role for Tim Curry, but Flight of the Conchords’ Jemaine Clement got the call).

Full of energetic incident, backed by a score co-written by Hamilton’s Lin-Manuel Miranda, and imbued with a respect for South Pacific customs and cultures, Moana hits all the right grace notes with such efficiency that it’s easy to overlook the fact that the lead is once again a plucky and intelligent heroine who absorbs valuable life lessons, the sidekick is once again a garrulous and talkative overachiever, and the comic relief is once again provided by an animal (in this case, a brain-damaged chicken).

But why fight it when the results are this charming? Better to just settle back and allow the Disney magic to wash over you like a gentle wave lapping the shore.