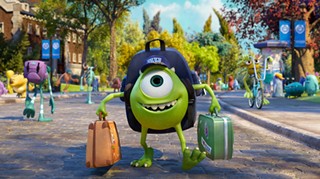 The Roman Empire fell. So did the Berlin Wall. It was only natural, then, that Pixar Animation Studios would eventually tumble as well.

Clearly, the Golden Age of Pixar has conclusively ended.

Starting with its inaugural feature-length production Toy Story in 1995 and running through Toy Story 3 in 2010, the studio produced 11 animated gems that garnered nothing but critical and commercial praise. It was a heady achievement, matched only by Studio Ghibli's Miyazaki-directed output and by a couple of Disney runs over the decades. But with the rapid succession of 2011's Cars 2, 2012's Brave and now Monsters University, it's apparent that the studio is no longer the top dog in the animation field, instead falling back with the competent but rarely inspired rest of the pack. Now operating under the Disney umbrella, the once cutting-edge outfit has traded complexity for complacency and comfort, with its latest efforts relying far too much on the sort of formulaic tendencies that have crippled Disney at various intervals over the years.

That's not to say these newest releases are turkeys - far from it. Even middle-tier Pixar flicks have plenty to offer: The unfairly hammered Cars 2 is an amusing takeoff on the spy genre, while Brave, which felt like a Pixar release about as much as Zero Dark Thirty did, features a magnificent heroine in a field that's often bereft of such role models. As for Monsters University, it places some of the company's most endearing characters in the middle of a surefire "underdog" scenario.

A prequel to 2001's Monsters, Inc., this looks at the period before the diminutive, one-eyed Mike Wazowski (voiced again by Billy Crystal) and the furry and gentle giant James P. "Sulley" Sullivan (John Goodman) were BFFs working together at the Monsters, Inc. factory, generating scares from small children in order to generate power for Monstropolis. The primary setting is college, where Mike has enrolled to pursue his lifelong dream of graduating as a top scarer. Because of his small stature and non-threatening demeanor, Mike has to hit the books hard in order to learn all the scaring techniques; not so Sulley, whose imposing size and ground-shaking roar means that he feels he can coast through his courses. Sulley bullies Mike, which brings out Mike's competitive streak; it all leads to a mishap that forces the pair to forget about joining top fraternities like Roar Omega Roar (ROR) and instead hook up with the worst. That would be Oozma Kappa (OK), whose members are basically the animated brethren of the leads in Revenge of the Nerds.

Like the other fraternities and sororities, Oozma Kappa finds itself competing in a multi-part competition known as the Scare Games, and it's during this second-half stretch that the movie works most feverishly to instill its underdog tale with the usual kid-geared messages such as it's OK to be yourself and individuals accomplish more when they work together as teams. It's the sort of head-patting that Pixar used to present so subtly that it almost qualified as a subliminal message. Here, though, it's punched across with the sort of thumping obviousness found in other studios' toon efforts.

Luckily, Monsters University is such a clever concoction in so many other ways that it's still a solid bet for summertime cinema-surfing. Next to the Toy Story trilogy, Monsters, Inc. remains my favorite Pixar title, so it's thrilling to reconnect with the wonderful characters of Mike and Sulley. There's no betrayal of character on the part of the scripters, as the adult monsters we first met in 2001 would logically have formed from the college critters we see here. There are some memorable new players as well, particularly Dean Hardscrabble (Helen Mirren), the humorless university head who takes an immediate dislike to both our heroes (the unsettling manner in which the CGI artists have designed her makes her the first genuinely creepy character in either film).

And as always, the visuals are absolutely staggering, with even the backdrops worthy of study. Even if the day arrives when the the promise of a Pixar narrative holds no more interest than the hint of a new straight-to-DVD actioner starring Steven Seagal, we can probably always count on the films to at least look good. Hopefully, that won't be anytime soon.