Review: Once Upon a Time in... Hollywood 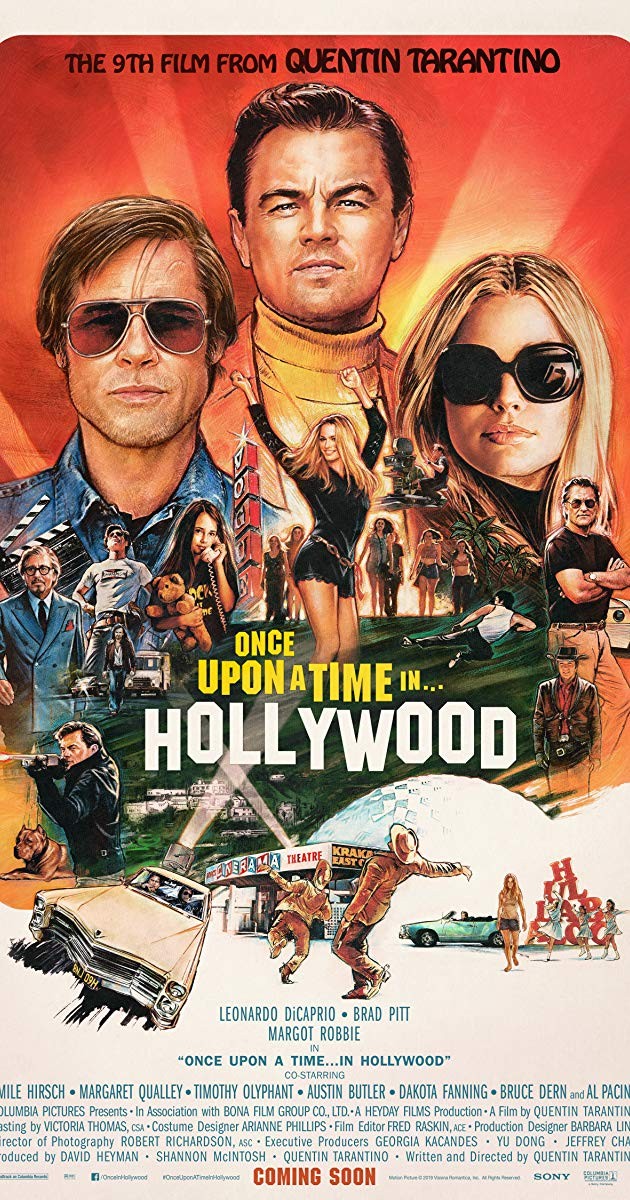 ONCE UPON A TIME IN… HOLLYWOOD

Never in my moviegoing lifetime did I expect to see a motion picture that would make reference to 1970’s C.C. & Company, an increasingly obscure biker flick starring Ann-Margret and a post-Super Bowl Joe Namath.

Yet I apparently hadn’t counted on the film-geek knowledge of Quentin Tarantino and his ability to retrieve the movie from his bottomless memory banks; thus, plopped down in the middle of Once Upon a Time in… Hollywood, is a trailer for C.C. & Company that features Broadway Joe in all his, uh, thespian glory.

Tarantino is notorious for sprinkling pop-culture references in all of his films, whether they’re taking place in the Wild West or during World War II. With a movie that places “Hollywood” right there in the title, it’s guaranteed that the trivial pursuits will be working double overtime, with the auteur flooding every reel with shout-outs to the movies, television series, and stars of the selected era (chiefly the late 1960s).

There’s Zeffirelli’s Romeo and Juliet on a movie-theater marquee (“Held over 8th month”). There’s Frank Sinatra’s Lady in Cement on a drive-in sign. There’s a poster for Bob Fosse’s Sweet Charity hanging outside a theater.

And the Hollywood-insider bits continue with Tarantino’s penchant to cast once-familiar faces in supporting roles. That’s the late Luke Perry of Beverly Hills, 90210 fame in one Western-show sequence, and portraying actor-director Sam Wanamaker is none other than the short-lived Spider-Man from ‘70s TV, Nicholas Hammond.

As a wet dream for movie buffs, TV aficionados, and nostalgists of a certain age, Once Upon a Time in… Hollywood clearly can’t be beat. But when it comes to anything more substantial, the picture is on shakier ground. Tarantino has decided to marry a real story with a reel one, not exactly an uncommon practice in cinema.

At the center of the fictional one are former leading man Rick Dalton (Leonardo DiCaprio) and his longtime friend and stunt double, Cliff Booth (Brad Pitt). Rick once enjoyed headlining a popular Western show (Bounty Law) but has since fallen on lean times, forced to appear as the guest-starring “heavy” in other actors’ hit series.

Career opportunities have similarly dried up for Cliff, who nevertheless remains content serving as Rick’s chauffeur, handyman, and all-around go-to guy. While Rick prepares to portray yet another villain on yet another Western series (Lancer), Cliff becomes (platonically) involved with Pussycat (Margaret Qualley), a hippie who’s actually part of a larger commune.

It’s here where fact and fiction dovetail, as Pussycat and her fellow dropouts are all followers of Charles Manson (Damon Herriman). And who should live right next door to Rick Dalton but actress Sharon Tate (Margot Robbie) and new hubby Roman Polanski (Rafal Zawierucha)?

With the “Polish prick” (as Steve McQueen calls him) usually away on business, a pregnant Tate keeps herself occupied by hanging out with friends and watching herself in such efforts as the Dean Martin spy spoof The Wrecking Crew. Meanwhile, Manson’s followers eagerly await word from their master, who of course has murder and mayhem on his mind.

The majority of Tarantino’s movies are long, but few suffer from flab — that’s not always the case here, as some of the scenes involving Rick’s work on Western sets could easily have been trimmed. The brightest moments involving this character are the ones that find Tarantino cannily inserting him into existing properties.

When someone states that he heard that Rick was up for the Steve McQueen part in the great WWII flick The Great Escape, we’re treated to an actual scene from the film, with Rick appearing as Hilts instead of the King of Cool. And when the guest-starring credits are flashed for an episode of The F.B.I., it’s not Burt Reynolds but Rick Dalton who’s been shoehorned into that slot between James Farentino and Norman Fell.

If some of Rick’s storyline feels extraneous, the same can’t be said for the sequences involving Cliff — all of Pitt’s scenes are gold, with two particularly standing out. One amusingly finds him getting into a tiff with Bruce Lee (Mike Moh) after he chuckles over the martial arts star’s assertion that he could cripple Cassius Clay.

The other is a remarkably tense sequence in which Pussycat takes him to the hippie commune, and he begins asking questions that nobody wants him to be asking.

Before the picture ends, Tarantino has one ace left up his sleeve, and it’s sure to divide audience opinion with the precision of the Red Sea parting. I only objected to it because it’s a trick Tarantino already used before — to brilliant effect — in one of his previous pictures.

There, it was audacious and perhaps even groundbreaking; here, it merely feels lazy and uninspired, as if the filmmaker has begun to run out of ideas and opted for an easy and proven way out. Still, even this miscalculation brings with it its own set of rewards, and it certainly doesn’t betray the spirit of what’s ultimately a savvy, sloppy, and sincere drive down the Hollywood boulevards of yore.