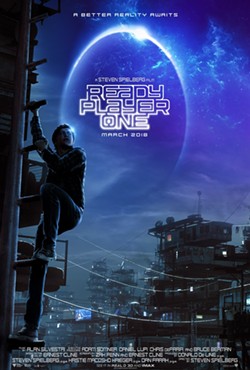 In the name of full disclosure, I have never read Ernest Cline’s bestselling 2011 novel Ready Player One. Of course, I haven’t read many books that ended up becoming popular movies, but it’s a tidbit that seems worth mentioning in this particular case.

Of course, I’m aware of the property and have actually perused great chunks of it – all of which left me thinking that Cline’s writing level tapped out somewhere around the fifth grade. More importantly, I have yet to meet anyone whose opinion I value who hasn’t dismissed the novel as a painful experience, a name-dropping tome where practically all the ‘80s-friendly nostalgia is artificially manufactured rather than organically integrated into the framework. In short, it basically sounds like fan fiction — Fifty Shades of Grey for guys who have yet to discover their peckers.

That Ready Player One the movie sounds superior to Ready Player One the book shouldn’t come as a complete surprise, given that Steven Spielberg is the one sitting in the director’s chair. After all, Spielberg worked similar alchemy when he helped transform Peter Benchley’s Jaws — a terrible book I did read — into merely one of the all-time great motion picture entertainments.

Ready Player One isn’t in the same league as Jaws – heck, it’s not even in the same 20,000 leagues – but on its own terms, it’s pleasing pablum, buoyed by an engaging cast and some savvy pop-culture references that are skillfully woven into the narrative rather than left hung out to dry.

Ready Player One is set in one of those dystopian Americas in which the one-percenters get richer while everyone else is left suffering — no, not 2018 but rather 2045. The only escape for the masses is the virtual-reality world of OASIS, where folks spend practically every waking hour indulging in their fantasies. James Halliday (Mark Rylance), who created the OASIS alongside former partner Ogden Morrow (Simon Pegg), has recently passed away, but not before revealing that there is an “Easter egg” hidden inside the virtual world and whoever solves the mystery will inherit ownership of Halliday’s empire.

Naturally, there’s a soulless bureaucrat, Nolen Sorrento (Ben Mendelsohn), who uses all the resources available to him through his conglomerate Innovative Online Industries (IOI) in an effort to crack the case and take over the OASIS; just as naturally, there’s an ordinary kid, 18-year-old Wade Watts (Tye Sheridan), who bests him at almost every turn.

Wade has help, though. In his online avatar guise of Parzival, he’s friends with Aech (Lena Waithe), Sho (Philip Zao) and Daito (Win Morisaki), and their outfit is soon joined by riot grrrl Art3mis. Wade falls for Art3mis, and more so after he meets Samantha (Olivia Cooke), the actual human behind the avatar. In the OASIS, they battle the likes of King Kong and Mechagodzilla while receiving much-needed assistance from Ted Hughes’ Iron Giant.

The film references come at the audience at warp speed (mostly ‘80s, but also some ‘70s and ‘90s), and if the cultural co-opting was frequently a lazy trigger on the printed page, a way to get easily impressed folks to mistake nostalgia for gravitas (“Wow, Cline mentions both Back to the Future and Knight Rider! This is the bestest book ever!”), there admittedly is some of that taking place on screen as well.

But unlike a book, where every word can have equal import, the screen allows for background action that can be taken as mere asides, which is the case with many of the visual cues here.

And while a few iconic films and characters take center stage at select points, they’re actually employed in imaginative and story-specific ways: A popular horror yarn from the 1980s receives its own showcase, while the sudden appearance of a slasher-flick fave provides the movie with one of its biggest laughs. (And as an Animal House fan, I appreciated the shout-out to Faber College.)

Dating back to his prime period, Spielberg has not only championed children on screen but has also ensured that they’re affable rather than annoying (I would take the empathic Elliott from E.T. over the insufferable Kevin McCallister from Home Alone any day of the week). With Ready Player One, that tradition continues, as the quintet representing the human side of the online avatars prove to be an engaging bunch. Sheridan (best known for Mud) and Cooke (the dying girl from Me, Earl and the Dying Girl) are charming in the central roles, and it’s just a shame that the roles of Waithe, Zao and Morisaki weren’t larger.

On the older side, Mendelsohn does well enough within the confines of a stock villain, while Rylance (who won an Oscar for Spielberg’s Bridge of Spies) wisely maximizes the charming aspects of his rather problematic character, a dreamer largely oblivious to the nightmarish real world.

At 140 minutes, Ready Player One could stand some judicious trimming, with its length particularly felt during the protracted third act. Certainly, the first snippet of film that should have been excised is when Wade tells Sorrento that “A fanboy knows a hater when he sees one,” an awful, awful line designed solely to inspire high-fives among white geeks who feel persecuted by a world that dared allow the creation of a female Ghostbusters film.

But while fanboys will blindly worship the movie and haters won’t even bother seeing it, the truth rests in between these extremes. On balance, Ready Player One is a diverting slice of entertainment, offering enough surface thrills to justify its existence in a world already overloading on nostalgic feints.