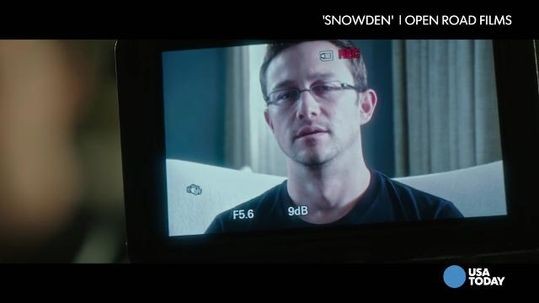 It’s no match for 2014’s Citizenfour, the Edward Snowden confessional that nabbed the Oscar for Best Documentary Feature, but let’s say this about Snowden: It’s the best movie Oliver Stone has helmed since the 20th century.

While it lacks the emotional wallop or technical prowess of Stone’s revered projects from the 1980s and ‘90s (Platoon, JFK and many more), it at least finds the controversial filmmaker shakily getting back on his feet following a post-Y2K resume that includes the disastrous likes of Alexander, W., Savages, and that Wall Street sequel with Shia LaBeouf.

Snowden, with a script by Stone and Kieran Fitzgerald (meshing together a pair of books), even uses as its starting point the meetings between the whistleblower (Joseph Gordon-Levitt), Citizenfour director Laura Poitras (Melissa Leo) and The Guardian journalists Glenn Greenwald (Zachary Quinto) and Ewen MacAskill (Tom Wilkinson), thereafter employing flashbacks as Snowden explains how he progressed from a blinders-on conservative to a man whose disgust in the government’s illegal surveillance of Americans led to him deciding to leak thousands of NSA files.

The film clearly views Snowden as a hero rather than a traitor, and it cuts no slack for anyone on either side of the political aisle, particularly the Bush administration for implementation and the Obama administration for continuation (there are also sound bites of Hillary Clinton stating that Snowden needs to be held accountable and Donald Trump suggesting that he be “executed”).

And if Stone has over the years lost the ability to infuse his pictures with righteous indignity, he at least has again applied his talents to a movie that actually matters.

Snowden is not showing in any theaters in the area.