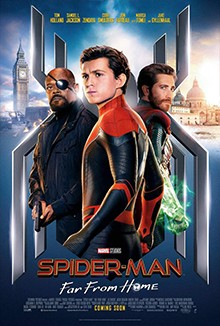 After all the heavy lifting they collectively had to perform in Avengers: Endgame, it’s only fair that Earth’s mightiest heroes be given some time off to relax and recuperate. That applies in spades to Peter Parker (Tom Holland), since he’s a teenager and technically should be spared from having to worry about anything beyond girls and grades.

But as Spider-Man: Far from Home makes abundantly clear right from the start, Peter’s problems are really just beginning.

Following “The Blip” (aka “The Snap” aka See Avengers: Endgame) and its five-years-later ramifications, everyone is still trying to put their lives back together. That includes Peter, still reeling from the loss of his friend and mentor, Tony Stark. Working through his sorrow, Peter prefers to focus on spending time with his best friend Ned (Jacob Batalon) and getting up the nerve to ask MJ (Zendaya) to be his girlfriend.

(Side note: It’s lucky for Peter that his friends also disappeared during “The Blip,” since it would otherwise be awkward for college-age kids Ned and MJ to have this high school squirt constantly pestering them.)

Peter figures he’ll have ample time to hang out with both during his class’s upcoming European field trip, but the (Marvel) universe has other plans for our friendly neighborhood webslinger.

Before he even leaves the U.S., there are those pestering calls from Nick Fury (Samuel L. Jackson), who wants Peter to step up in his role as a superhero. And once he hits Europe, there are the Elementals, interdimensional beings that employ nature to batter our planet. In Venice, that would be the Water Elemental, and while Peter is caught somewhat flatfooted by the creature, another dynamic figure, Quentin Beck/Mysterio (Jake Gyllenhaal), is on hand to save the day.

Peter and Quentin hit it off immediately, and Peter sees in the older man not only a mentor like Tony Stark but possibly a new hero as potentially iconic and influential as Iron Man.

Following 2017’s impressive Spider-Man: Homecoming, which provided Holland’s hero with his first solo starring vehicle, Spider-Man: Far from Home ends up in the so-close-and-yet-so-far category. The first half is mostly terrific, thanks to the immense charms of Holland and his youthful co-stars as well as their characters’ various shenanigans.

Indeed, this portion of the film succeeds as a high school comedy first and a superhero saga second, although the specter of Thanos’ world-changing actions are never far from anyone’s thoughts.

A villain eventually comes into focus in the second half, and it’s here where the film takes a tumble. His nefarious scheme is cut from the same megalomaniacal cloth donned by most evildoers, yet the specifics sound puny and borderline risible. And while this character’s self-entitled status, combined with his propensity for making up “alternative facts,” makes him the perfect Trump-era villain, he’s written too thinly to make much of an impression.

Couple this with the fact that the homestretch is packed with numbing CGI battles (including some “virtual reality” interludes that pale next to the phantasmagoric sights seen in last year’s Oscar-winning Spider-Man: Into the Spider-Verse), and the movie has lost much of the personality that propelled it during the first part.

After understandably receiving PTO from Endgame, the obligatory mid-credits and post-credits sequences have returned for active duty. The post-credits segment is one of the worst found in all 23 MCU installments: It’s not only moronic and meaningless, but it makes no sense in the context of how we’ve seen certain characters behave throughout the preceding two hours.

But the mid-credits sequence? In a word, it’s killer. It’s arguably the most exciting part of Spider-Man: Far from Home, and it bodes well for the next chapter in this “Spidey Home” franchise, whether it ends up being called Spider-Man: Homeward Bound, Spider-Man: Home for the Holidays, or even Spider-Man: Home Alone: Lost in New York.