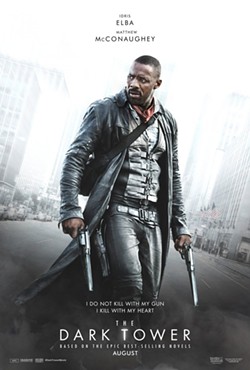 The long-in-the-making movie The Dark Tower runs 95 minutes yet is based on the Stephen King book series that ran over the course of eight novels. Such a condensation may not be quite as vexing as attempting to place all of Shakespeare’s texts onto a single Post-it note, but it nevertheless ranks as an exercise in futility.

Despite the material’s links to other King staples, the movie has less in common with the prolific author’s output and more in common with such Young Adult adaptations as the Divergent and Percy Jackson series. Certainly, there are nods here and there to the King oeuvre (It, 1408, The Shining), but stripped of dramatic heft, the film mainly plays like the YA-sanctioned adventures of a young boy who gets to hang out with a gunslinger and fight a wicked sorcerer.

The boy is Jake Chambers (Tom Taylor), who suffers from recurring dreams involving an imposing tower. The gunslinger is Roland Deschain (Idris Elba), the last in a long line of peacekeepers sworn to protect the title edifice. And the sorcerer is the Man in Black – no, not Johnny Cash, but a vile being seeking to destroy the Tower and thereby unleash all manner of otherworldly evildoers.

The Man in Black is played by Matthew McConaughey, who seems to have based his performance on the most obnoxious car salesman he’s ever met. McConaughey’s Man in Black isn’t frightening in the least, but he could probably get you a sweet deal on a Lincoln Continental.

The casting of Elba makes more sense than that of his surfer dude co-star, but while he brings the proper degree of gravitas to his role, the thinness of the screenplay means that there’s little depth to his characterization. The entire film suffers from a similar measure of surface sheen.

Potentially interesting players come and go, other worlds and dimensions are visited, and characters engage in weighty proclamations like “He who aims with his hand has forgotten the face of his father,” “He has the shine!” and “The gun is good; the penis is evil” (wait, that one’s from Zardoz; never mind).

But by barreling through the story at Mach speed, nothing is allowed to marinate and deepen. What’s left, then, is a shallow fantasy in which most of the unimaginative action sequences consist of little more than Roland shooting his pistols at various villains. It may be High Noon in the land of The Dark Tower, but it’s a low ebb for viewers expecting anything of substance.