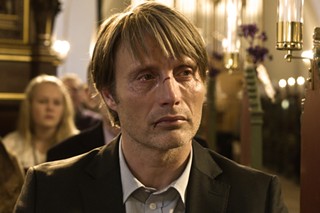 Few crimes are as revolting as the sexual abuse of small children, and even staunch opponents of capital punishment should reasonably find their stance softening when it comes to meting out the proper justice for such an abhorrent offense. Yet witch hunts also have no place in a sane society, whether they’re in the form of burning people during the Spanish Inquisition or ruining careers during the Hollywood blacklist.

The Danish import The Hunt tackles both subjects head-on, and the result is a powerful movie dominated by a formidable performance by Mads Mikkelsen.

Mikkelsen, whose Best Actor citation was one of the film’s impressive three victories at last year’s Cannes Film Festival, plays Lucas, a divorcee who works at a kindergarten in a small town where he is admired by children and adults alike. One of his charges is little Klara (Annika Wedderkopp), who’s the daughter of his best friend Theo (Thomas Bo Larsen) and Theo’s wife Agnes (Anne Louise Hassing). Because she’s treated better by Lucas than by just about anyone else, Klara develops a crush on him. But when he “rejects” her (he returns a heart she made for him and tells her that Mommy and Daddy are the only adults she should kiss on the lips), she becomes angry and informs the school head Grethe (Susse Wold) that Lucas showed her his penis (in actuality, she saw a penis on a computer screen that her brother and his friend flashed in front of her). Klara isn’t a bad seed - she means no real harm and is quick to recant the lie - but Grethe and the hack psychiatrist she invites to question the girl take this accusation and run with it.

Soon, the entire town has banded against Lucas, who can’t even go buy groceries without getting beaten up and tossed out of the store. Only his teenage son Marcus (Lasse Fogelstrom) and a few in-laws have his back, although the people he really wants to reach are Klara’s parents.

Of a piece with Arthur Miller’s The Crucible and Lillian Hellman’s The Children’s Hour, two other works about persecution and hypocrisy, The Hunt is a movie that foregoes any ambiguity in order to place us squarely behind its battered protagonist. And yet, with the exception of the overzealous Grethe (the closest this movie gets to Miller’s self-righteous Judge Danforth), the townspeople pretty much behave in the same knee-jerk manner as many of us would upon hearing that a child’s been molested. When we’re mentally hurling insults at the folks who are treating Lucas so badly, we are in effect admonishing ourselves, and it’s a reaction that’s startling, sobering and quite potent.

This internal tension remains throughout the picture, which never makes a false move until a wrap-up sequence that doesn’t completely ring true. Fortunately, that sequence is followed by a brilliant coda, one that fully restores the film’s ability to hit us where we live.