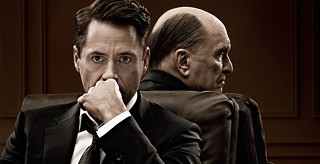 Robert Downey Jr. and Robert Duvall are both excellent actors, and their roles in The Judge certainly fit them like tailored suits. But playing to their strengths actually proves to be a weakness, since it results in performances offering little that's fresh or surprising.

Downey's Hank Palmer is clearly so much smarter, funnier, cockier and handsomer than everyone around him that the character's name might as well be Tony Stark or Sherlock Holmes.

And while Duvall's Joseph Palmer offers the actor a few moments to try something new, the part is overall not far removed from the crusty codgers the veteran has been relegated to playing over the past decade.

Still, the roster of fine actors -- beyond the two Bobs, you also get Vera Farmiga, Vincent D'Onofrio and Billy Bob Thornton -- makes this easy to watch, if not always easy to enjoy.

Hank Palmer is a slick big-city lawyer who returns to his small-town burg for his mother's funeral. It's the first time he's been home in decades, having kept his distance mainly because of his strained relationship with his father.

But when Joseph is accused of deliberately killing someone by running them over with his car, Hank reluctantly decides to defend his dad in court.

This sounds like the sort of courtroom caper that can't miss, but writer-director David Dobkin, the Wedding Crashers and Fred Claus helmer who's now making a lunge for serious-cinema street cred, packs his overlong (142 minutes) piece with so much empty incident and superfluous drama that you'll swear you just watched a television miniseries over three nights rather than a theatrical release in one sitting.

This is the sort of movie where Hank has a dimwitted younger brother (Jeremy Strong) who's afforded all the complexities of an accordion-playing monkey, on hand solely to allow audience members to chuckle at his oh-isn't-he-cute funnies that, of course, weren't spoken to be funny.

This is also the sort of movie where a character meets his fate in a scene that's meant to be moving and cathartic but is instead so baldly telegraphed that it's only hackneyed and wince-inducing. If there are any narrative roads less traveled, Dobkin makes sure to skip every last one of them with this thuddingly obvious picture.

Perhaps the film's biggest flaw, though, is its muddy view of the law. Hank and Joseph Palmer are not good people -- they're both really, really awful, in fact -- and, worse, they're not interesting people, meaning it's hard to root for them while they twist justice as if it were a licorice stick.

The film's antagonist is a savvy prosecutor named Dwight Dickham, and, thanks to Thornton's performance in the role, he's the one who commands our attention with his cagey courtroom maneuvers and his genuine love for the law. Where's his movie?