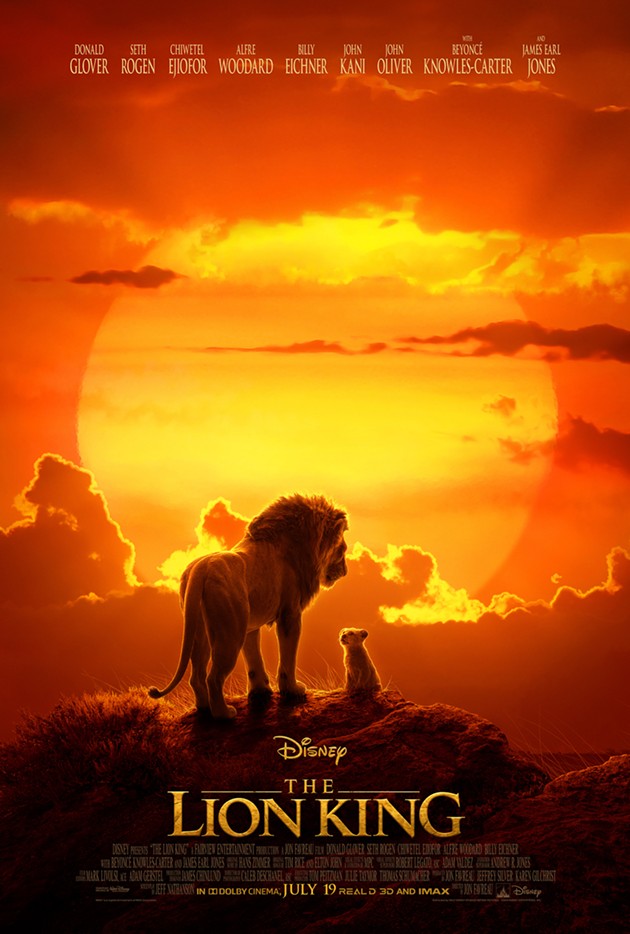 Yet as The Lion King, Version 2.0, gets underway, memories of Van Sant’s failed experiment come flooding back. The entire opening sequence of the animals gathering at Pride Rock while “The Circle of Life” plays over the speakers is exactly the same in this CGI version as it was in the original 1994 old-school-animated feature.

Every shot, every angle, every blade of grass remains the same, and two hours of mimicry would make for a very long movie indeed.

But just as Van Sant eventually departed ever-so-slightly from the original material, so too do director Jon Favreau and scripter Jeff Nathanson. Yet even with minor modifications, this Lion King can never quite step out of the shadow of its predecessor, and many will write it off as merely self-absorbed and self-congratulatory.

All of the enduring characters have returned in photorealistic form, including the majestic Mufasa, his restless son Simba, and his conniving brother Scar. As before, a tragedy sends Simba scampering away from his home turf, on the precipice of perishing until he’s rescued by the garrulous team of the meerkat Timon and the warthog Pumbaa.

The Lion King remains a story of oversized Shakespearean actions, ambitions and emotions, channeling Hamlet as it looks at familial relationships and reserving its most potent bits for the father-son dynamics.

Here’s the tricky part about covering this new take on The Lion King. If you’ve seen the original, it’s impossible not to compare and contrast, and this version falls short in practically every way.

Those who have never seen the ’94 edition will doubtless be much more charitable in their assessment, although even they might be put off by the soullessness of the entire enterprise. The Lion King 2.0 feels like nothing more than a cash grab, and, yes, of course making money is the bottom line.

But Disney’s pilfering of its past usually arrives with some artistry and imagination attached — check out 2015’s Cinderella as Exhibit A and 2017’s Beauty and the Beast as Exhibit B. The Lion King, on the other hand, feels like it was produced on a dare, or maybe because the Disney suits were feeling particularly arrogant.

It brings to mind Jeff Goldblum’s line in Jurassic Park: “[They] were so preoccupied with whether or not they could, they didn’t stop to think if they should.”

The photorealism of the project is perfect, but that’s part of the problem. It doesn’t allow for as much physical expression as cartoons, so everyone here is delivering their lines behind a barrier of inertia.

Simba’s face basically remains the same whether he’s chasing butterflies or getting trampled by wildebeest — he’s the Jean-Claude Van Damme of CGI animals. Meanwhile, Timon remains a great character, but I haven’t seen eyes this lifeless and devoid of expression since Tom Hanks tried to get everyone to climb aboard his Polar Express.

Speaking of Timon, Nathan Lane’s voice work in the original was one of that picture’s highlights — ditto James Earl Jones as Mufasa, Ernie Sabella as Pumbaa, and especially Jeremy Irons as Scar. Jones has been brought back to active duty to reprise his turn as Mufasa — if only they had brought everyone back.

There are plenty of fine actors involved with this picture, but few make much of an impression, including Donald Glover as Simba, Beyonce as Nala, and Chiwetel Ejiofor as Scar. Only Seth Rogen as Pumbaa and, to a lesser extent, Billy Eichner as Timon come close to making the roles their own, even if they’re stripped of some of their characters’ best material.

For instance, I missed Timon’s reaction to the near-lifeless body of Simba as well as his snort of “What mook?” in the star-gazing sequence.

Then again, I expect plenty of nostalgic longing will greet viewings of The Lion King. When audience emotion does get elevated, it’s as likely to have emanated from fond memories of the original than anything actually occurring on screen.

That was certainly my experience in select scenes, as, analyzing my thought process in the moment, I realized I was reacting to cherished images in my mind’s eye rather than to the stiff, stuffed animals sauntering across the auditorium. So if you want to plunk down $10 or $12 to basically lower your eyelids and watch the movie screen in your head, be my guest.