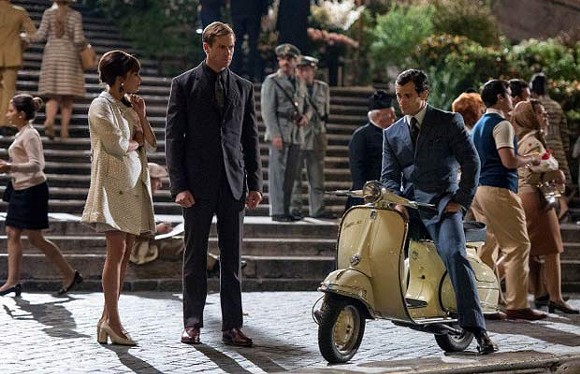 With a pair of bland pretty-boy leads, the hyperactive Guy Ritchie in the director’s seat, and a trailer that didn’t exactly inspire hope, The Man from U.N.C.L.E. promised to be the sort of late-summer miss that would leave me crying uncle before the halfway mark. Instead, it turns out to be an unassuming, undemanding surprise.

It’s based, of course, on the hit TV series from the 1960s, the sort of effort that arrived fast and furious in the wake of James Bond’s phenomenal success at the box office. Secret agents were everywhere during that decade, and while U.N.C.L.E. never quite went the route of the spy spoof Get Smart (although the third season could get awfully campy, a side effect of the Batman craze), it offered enough of a wink-wink-nudge-nudge attitude to make even the playful 007 flicks look as serious-minded as The Spy Who Came In from the Cold by comparison.

The titular man was Napoleon Solo, played by Robert Vaughn with the right mix of suavity and insouciance. As the Russian Illya Kuryakin, Solo’s friend and co-worker at the United Network Command for Law and Enforcement, David McCallum became the series’ breakout star – amusingly, his bowl haircut on the show and his heartthrob status among adoring teenyboppers led to him being tagged “the fifth Beatle.”

On the series, Solo and Kuryakin were fellow agents from the start, which makes this new picture operate as an origin story of sorts. The Cold War rages on, and when we first meet Solo (Henry Cavill) and Kuryakin (Armie Hammer) in 1963, they’re rival agents (Solo for the CIA, Kuryakin for the KGB) attempting to kill each other near the renowned Checkpoint Charlie.

Solo is attempting to smuggle an important asset named Gaby Teller (Alicia Vikander, Ex Machina’s Ava) out of East Berlin while Kuryakin is trying to stop him. It’s not long after, however, that the men’s respective organizations order them to team up in an effort to stop the usual coterie of global villains (including an ex-Nazi played with lip-smacking zeal by Sylvester Groth) from getting their hands on nuclear warheads.

Warner Bros. didn’t do itself any favors by releasing this into theaters so soon after Mission: Impossible – Rogue Nation, since both sport similarities beyond the fact that they’re based on vintage spy shows (for one thing, an U.N.C.L.E. plot twist is startlingly comparable to one in M:I – RN).

This new film may not quite match the intensity or excitement of the Tom Cruise vehicle, but it’s nevertheless a worthwhile endeavor, with Ritchie toning down the spastic shooting style that all but destroyed his Sherlock Holmes films with Robert Downey Jr.

That’s not to say he’s become as nondescript a filmmaker as, say, his fellow Brit, the late Richard Attenborough, but the technical flourishes displayed in The Man from U.N.C.L.E. (including a rare modern use of split screen) actually benefit the storyline rather than just function as masturbatory moviemaking.

There are at least two dozen actors who would have made a better Napoleon Solo than Cavill – indeed, George Clooney was originally cast but had to drop out, and Michael Fassbender, Channing Tatum and even Cruise were among the countless considered – but I’ll give him a break since he’s not as soul-crushingly dull as when he played Superman in the dreary fanboy fave Man of Steel.

The real delight here is Hammer. So memorable as the Winklevii in The Social Network, he followed that with dryly earnest turns in The Lone Ranger, Mirror Mirror and J. Edgar. It’s nice to see him as an engaging presence again, and his Illya Kuryakin proves to be the film’s most interesting character as well as its primary wellspring of low-simmer humor.

Incidentally, the theme music for the series was created by the late, great Jerry Goldsmith, who nearly rivaled John Williams in crafting magnificent, majestic scores (countless credits include Planet of the Apes, Chinatown, Alien, Star Trek: The Motion Picture and The Omen, winning his only Oscar for the last-named). Goldsmith’s original U.N.C.L.E. score is one of his best, and I fully expected the film to pay it tribute (like the Mission: Impossible films do with Lalo Schifrin’s classic TV score).

Instead, the employed snippet has been rendered unrecognizable with its idiotic changes in tempo and instrumentation. Fortunately, this aural atrocity marks one of the very few times that this handsome big-screen version is hopelessly out of tune.

The Man from U.N.C.L.E. is not showing in any theaters in the area.