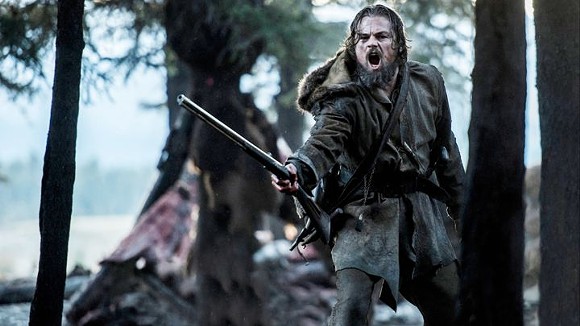 Between Babel and now The Revenant, it’s tempting to drag out that hoary expression of the emperor having no clothes to describe director Alejandro González Iñárritu and the fervor surrounding his movies.

But then one recalls such efforts as Amores Perros, 21 Grams and especially Birdman (the best picture of 2014, according to Oscar and me), and it’s clear that he’s equally capable of being decked out in sartorial splendor.

Fueled by his passion and his intellect, his films always register as Art with a capital A but are occasionally hampered by presenting entertainment with a lower-case e.

The Revenant shares some DNA with Martin Scorsese’s The Wolf of Wall Street, and it goes beyond the fact that both showcase Leonardo DiCaprio in Oscar-swooping mode. Like Wolf, both are stylistic studies in overkill, and both serve as masturbatory material for a segment of American males who clutch them like crucifixes in an attempt to ward off the encroaching new world order that they feel downgrades machismo and manliness.

In these respects, the film has less in common with such accomplished frontier flicks as 1972’s Jeremiah Johnson and 1992’s The Last of the Mohicans and instead brings to mind Mel Gibson’s garish snuff films The Passion of the Christ and Apocalypto, chest-thumping works of endurance rather than enjoyment.

Set in 1823 and loosely based on a true story, the film casts DiCaprio as Hugh Glass, an accomplished frontiersman and guide traveling with a military outfit led by Captain Andrew Henry (the ubiquitous Domhnall Gleeson, also presently seen in Star Wars: The Force Awakens and Brooklyn). An attack by Arikara Indians leaves most of the party dead, and Glass himself is later critically injured after a close encounter with a grizzly bear (and, no, he is NOT raped by the bear; that was a sophomoric rumor started by right-wing imbecile Matt Drudge and spread by both his sycophants and by Internet dwellers).

A redneck soldier named John Fitzgerald (British actor Tom Hardy, laboring mightily to convince us he’s a Southern boy), who hates Glass just because, agrees to look after the wounded man for a large payment; instead, he eventually commits a great atrocity against him before leaving him for dead. But Glass will have his revenge, and like those cute pets in The Incredible Journey, he attempts to travel many miles to reach his desired destination.

Yes, it’s the familiar revenge motif – the one employed in hundreds of movies from Rolling Thunder to Machete to the Kill Bill twofer – but here such a simple scenario buckles under the weight of Iñárritu’s approach.

The picture is a bruising beauty in terms of its visuals – no surprise, since the cinematographer is Emmanuel Lubezki, coming off back-to-back Oscars for Gravity and Birdman – and there are a number of powerful scenes spread throughout (that sequence with the bear is astounding).

But Iñárritu’s artfulness too often feels at odds with the threadbare story, and his attempts at injecting elements of mysticism (apparently a requirement for any director making a movie involving Native Americans, Michael Mann and Kevin Costner admirably excepted) prove to be heavy-handed. And then there are the paper-thin protagonists Glass and Fitzgerald, neither of whom are particularly interesting as screen characters.

If DiCaprio finally wins his Oscar for this movie, it’s yet another example of the Academy rewarding the right performer for the wrong picture – he’s committed to his grunts, groans and growls (largely the extent of his dialogue), but then again, so was Charles Bronson in Death Wish.

And while I’m not about to spoil the ending, let’s just say that the manner in which it sidesteps the piece’s primary thrust is both insincere and hypocritical (on the part of Glass AND Iñárritu). It’s basically an example of having your cake – or, in this instance, caked-on blood and mud – and eating it, too.

The Revenant is not showing in any theaters in the area.