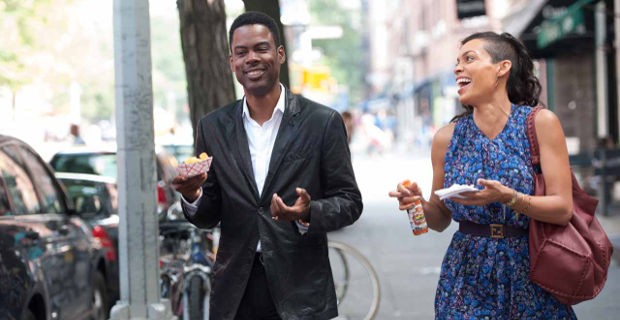 Top five thoughts that crossed my mind as I watched Top Five, the new film written by, directed by and starring Chris Rock.

1) The careers of Rock and Richard Pryor are similar in that both were brilliant standup comedians never quite able to translate that success into Hollywood pictures, many of which were nose-pinching atrocities like Pryor's The Toy and Rock's Grown Ups twofer with pal Adam Sandler. And like Pryor with the underrated Jo Jo Dancer, Your Life Is Calling, Rock now lays it all on the line with Top Five, drawing upon personal experience to fashion the tale of Andre Allen, a popular comedian who's tired of headlining fluff like the Hammy blockbusters (wherein he plays a bear-cop whose catchphrase is "It's Hammy time!") and has aspirations to make more serious pictures (like his new piece Uprize, about a Haitian slave revolt that left 50,000 whites dead).

2) When Top Five is funny, it's very funny. There are choice bits in this picture that alone are worth the price of admission. A lengthy hotel-room sequence featuring Rock, Cedric the Entertainer and a pair of party girls deserves to be the water-cooler talk of the season. It's Cedric the Entertainer like you've never seen him before – that's not necessarily a good thing, but it is a hysterical one. There's also a riotous sequence later in the film that will leave viewers simultaneously laughing and squirming (hint: It involves a liberal dousing of Tabasco sauce).

3) The plot turns far too conventional for its own good. This surprised me, since Rock was doing a fine job of keeping it raw and real. But there's a breaking development that occurs in the relationship between Andre and Chelsea Brown (Rosario Dawson), a New York Times writer following him for a day, that's as imbecilic as anything found in an inane Katherine Heigl rom-com. There's also a major plot thread involving Andre's upcoming wedding to a reality-TV star (Gabrielle Union) that never feels anything but forced.

4) The celebrity cameos add nothing to the picture. Sandler, Whoopi Goldberg and Jerry Seinfeld appear as themselves, and they yield about as many laughs as a six-car pileup.

5) Speaking of which, I hope Tracy Morgan wins his suit against the heinous Walmart overlords trying to insidiously shirk their responsibilities in the accident involving a company truck, which killed comedian James "Jimmy Mack" McNair and seriously injured Morgan and others. This came to mind during the screening because Morgan has a supporting role in Top Five. He's hysterical in his brief appearance as Fred, glumly sitting on a couch and resignedly taking potshots from the other characters in the scene.