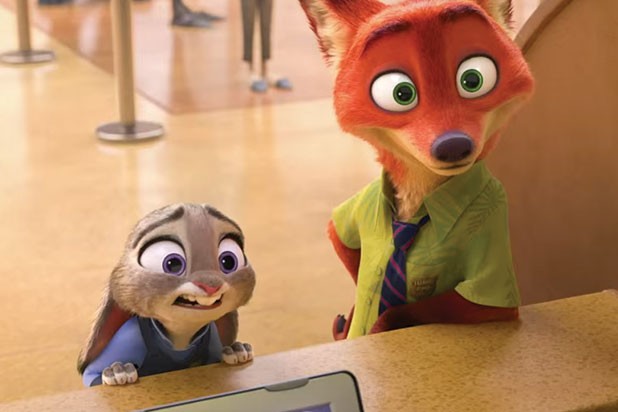 For the sake of the children – heck, for your own sake – be sure not to rapidly skim the multiplex marquee and accidentally amble into Zoolander 2 instead of Zootopia. While one ranks as an atrocity worthy of living in infamy, the other is an absolute delight, certain to satisfy adults as much as (even more than?) the small fry.

That Zootopia proves to be such a joyous occasion is something of a surprise, since off-season animated efforts typically tend to be on the rancid side (e.g. The Lorax, Gnomeo & Juliet). Yet here’s a family film that would be welcome any time of the year.

At its center is a marvelous new character: Judy Hopps (voiced by Once Upon a Time’s Ginnifer Goodwin), a small-town rabbit who dreams of moving to the sprawling metropolis of Zootopia and becoming the first bunny to ever serve as a police officer, a vocation that has always been filled by more imposing animals such as rhinos and tigers. Judy nevertheless graduates from the academy and earns her badge, but the police chief Bogo (Idris Elba) is unimpressed and relegates her to meter-maid duty. Rather than slapping tickets on cars, she would be much more interested in joining the other cops in tackling the mystery of why approximately a dozen citizens have vanished without a trace.

A chance encounter with a con-artist fox named Nick Wilde (Jason Bateman) provides the impetus she needs to pursue the case on her own, and, with the reluctant help of Nick, she uncovers a labyrinthine plot with fearful implications.

It ain’t Chinatown, of course, but Zootopia crafts an unexpectedly complex mystery, one that also allows for an examination of cultural differences and the poisonous prejudices that result in being judged by the color — and, in this anthropomorphic world, the texture — of one’s skin.

It’s particularly apropos given the current mood of fear and loathing in this exceedingly nasty election year.

The beauty of Zootopia, though, is that you can be unaware of the subtext (as would a child … or a right-wing moron) and still reap the benefits of an imaginatively designed endeavor packed with huge laughs. The sequence involving the sloths will remain one of the comic highlights of 2016 cinema, and there’s a bit with wolves that’s nearly as uproarious.

If nothing else, Zootopia proves that laughter is still the best medicine, providing temporary soothing relief during these sick times.

Zootopia and Zootopia in Disney Digital 3D are not showing in any theaters in the area.