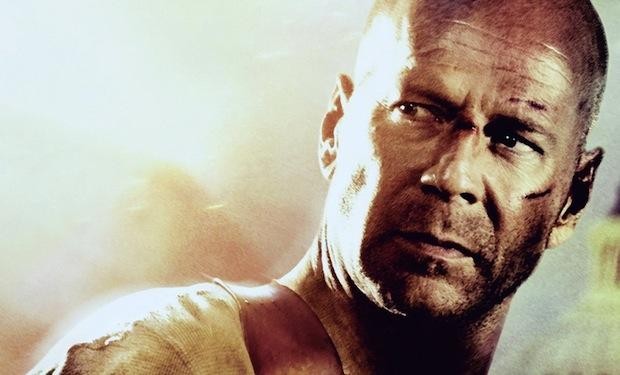 A GOOD DAY TO DIE HARD

It's been exactly a quarter-century since Bruce Willis became a movie star with the action classic Die Hard, but while 2013 finds the actor headlining the fifth film in the never-say-die series, it's clear that A Good Day to Die Hard does his image -- and his iconic character -- no favors. John McClane, once an exciting screen presence, is now simply an old grouch who's as dull and predictable as a presidential candidate in debate mode. The movie poster might as well read, "John McClane IS John McCain," given that this dud isn't likely to raise anyone's pulse.

The first Die Hard entry set outside the U.S., this finds McClane heading to Russia to check on his estranged son Jack (Jai Courtney), who isn't the druggie burnout he expected but rather a covert agent for the CIA. Jack's mission is to extract a political prisoner (the fine German actor Sebastian Koch, almost unrecognizable under a scruffy beard), which becomes a mission impossible once Pappy McClane arrives on the scene and screws everything up. But no worries: Big Daddy has plenty of time to make amends, as he proceeds to blow away Russkies, save his son's skin and rack up an obscene amount of collateral damage.

The father-son/secret agent angle has already been recently used by Willis himself in last year's The Cold Light of Day, a movie this one resembles in its dogged devotion to dimness. The story even pays a visit to Chernobyl, where the McClane boys take a bath in radioactive water, make bonding cracks about John's (ergo, Bruce's) baldness and bump into the tourists from last year's horror flick Chernobyl Diaries. Just kidding on that last one; instead, they bump into scores of villains, one of whom suffers (spoiler, but who really gives a damn?) death-by-whirling-helicopter-blade. A unique cinematic demise? Not really: A character suffered the exact same fate in 1991's execrable The Last Boy Scout, a film which -- oh, yeah -- also starred Bruce Willis.

John McClane's signature catchphrase "Yippee ki-yay" is uttered, though he's more prone this time around to channeling City Slickers' Billy Crystal by shouting, "I'm on vacation!" -- a line that isn't especially witty (or accurate) the first time he says it and certainly has worn out its welcome by the time he amends it to "I'm on fucking vacation!"

Unbelievably, this great character has made a complete transformation from a likable, sympathetic Everyman in 1988 to an arrogant, insufferable jerk in 2013. All traces of personality have disappeared, leaving only a plastic action figure merely going through the motions. Whereas McClane employed ingenuity in at least the first two Die Hard films, his MO here is to mainly aim and shoot. He even gets to be the Ugly American, yelling at an understandably irate driver (whose car has been hit by McClane), "Do I look like I speak your fucking language?" before punching him. The role has been so thoroughly siphoned of individuality and personality than if there's another sequel, Willis doesn't even have to play McClane: The producers can nab Schwarzenegger, Stallone, Bieber or anybody else their avaricious little hearts desire.

Emma Thompson delivers the worst performance of her distinguished career, Jeremy Irons resists the urge to have the producers sign his paycheck even as the cameras are rolling on him, and the exaggerated accents by a significant chunk of the cast are no more authentically Southern than the Great Wall of China. And so it goes with Beautiful Creatures, writer-director Richard LaGravenese's dreary adaptation of a Young Adult novel penned by Kami Garcia and Margaret Stohl.

Set in a fictional South Carolina town -- the type where Civil War reenactments are more popular than Christmas, and books like To Kill a Mockingbird are banned -  the story focuses on rebel without a clue Ethan Wate (Alden Ehrenreich) and the strange situations he encounters when new girl Lena Duchannes (Alice Englert, Jane Campion's daughter) turns up as a new student at his high school. Ethan works hard to befriend the girl, who is otherwise ostracized by local goobers -- like the Bible-thumping Mrs. Lincoln (Thompson) -- who already fear her eccentric uncle (Irons). Ethan eventually learns that Lena comes from a family of Casters (the preferred word for witches) and, like Luke Skywalker before her, she will end up either succumbing to the dark side or crusading for goodness by taking up arms against an evil parent.

Sparkly vampires suddenly look very appealing when compared to the Gothic witches on display here. For all the vitriol directed at the shaky Twilight series, all of its entries are definitely better than this dull and insipid movie, a trial run meant to gauge viewer interest in another series aimed at younger audiences.

To the kids whose possible attendance will decide its fate, allow me to quote Nancy Reagan, who's incidentally referenced in one of the film's few amusing lines of dialogue. Just say no