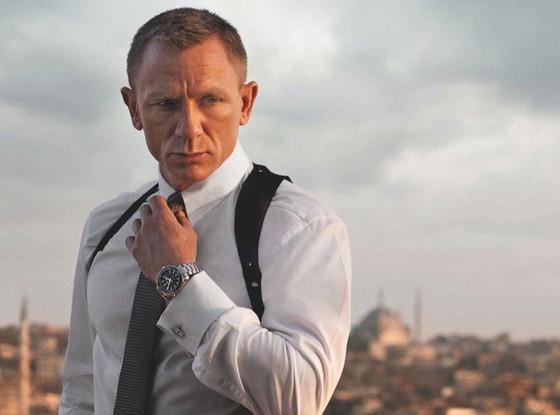 Any list of the 10 best James Bond films would have to include 2006's Casino Royale and the latest installment, Skyfall. That's a pretty impressive batting average for Daniel Craig, who's appeared in only three out of the 23 movies starring the dapper British agent with a licence (U.K. spelling intentional) to kill. It also speaks well for a series that's celebrating its 50th anniversary this year, a half-century stretch that has seen the franchise occasionally teetering on the brink of irrelevance yet always managing to right itself.

In the Craig canon, Casino Royale still ranks as the best, although Skyfall proves to be superior to 2008's Quantum of Solace (itself better than the mostly blistering reviews would suggest). This new entry is a 007 saga certain to leave viewers both shaken and stirred, and not only by the exciting set-pieces. That's because this film, like the two before it, occasionally allows Bond to wear his heart on his tailored sleeve, with Craig revealing flashes of empathy more frequently than did his predecessors in the role. It also takes the character of M (Judi Dench), who dating back to the Pierce Brosnan flicks has been a rigid, humorless leader, and humanizes her.

That's not initially the case: When we first see M, she's ordering Eve (Naomie Harris), one of MI6's rookie agents, to "take the shot" and down the enemy operative engaged in hand-to-hand combat with Bond. It's a cold-blooded call, placing 007's life in danger, and sure enough, Eve flubs the shot and kills our hero. Of course, he's not really dead; instead, after a brief PTO full of self-pity and binge drinking, he returns to active duty, angry at M for her betrayal but determined to protect her and the organization from a new threat: a crooning gent by the name of Silva (Javier Bardem), who vows to exact his revenge on M for a past betrayal even greater than the one she inflicted on Bond.

Ace screenwriter John Logan (Hugo, Rango) joins series vets Neal Purvis and Robert Wade to conjure up a script that accomplishes many things, all of them well. It introduces new characters who end up surprising us with the directions they take (both Eve and a scowling MI6 head played by Ralph Fiennes), reconfigures familiar roles from the past (e.g. Q, the aged weapons specialist played by Desmond Llewelyn in 17 films from 1963 until his death in 1999, is now a young computer geek played by Ben Whishaw), provides in-jokes for series fans (a beloved car makes an appearance) and, most intriguingly, offers a bit of back story for Agent 007.

Oscar-winning director Sam Mendes (American Beauty), aided by the Coen brothers' regular cinematographer Roger Deakins, provides all these proceedings with a grittier texture than often seen in this franchise, and while none of the set pieces here can match that incredible parkour opening in Casino Royale, most - a battle atop a moving train, a shadowy skirmish in a skyscraper, a roughhouse session involving an amusing appearance by a Komodo dragon - do not disappoint.

If there's a criticism to be leveled against Skyfall, it's that Bardem doesn't receive nearly enough screen time. He's one of the franchise's more interesting villains-- playful, talkative, flirtatious, philosophical, fey (what other bad guy has ever caused Bond to teasingly suggest that 007 might swing both ways?) and, above all, always a menacing presence. The movie could have used more scenes of him; instead, he doesn't appear until well into the second act and is often forgotten for stretches thereafter.

Thankfully, other performers are around to pick up the acting (if not villainous) void, including the great Albert Finney in a key role and, of course, Dench. Mainly, though, there's Craig, who has clearly established himself as the best Bond since Sean Connery first filled the role in 1962's Dr. No. Tough and taciturn, he has reenergized the franchise after the shaky Brosnan years, definitely demonstrating that the series has once again earned its license to thrill.