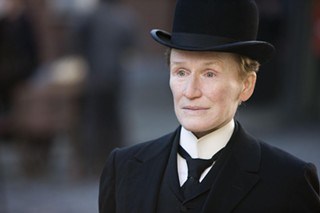 Glenn Close has the title role in "Albert Nobbs."

As part of his four-score from 2011, Michael Fassbender turns up in A Dangerous Method as Carl Jung, the Swiss doctor often deemed the father of modern psychology. Watching him tackle Jung as a cautious, conflicted man, it's hard to see the same person who was so brooding in Jane Eyre, so, uh, magnetic in X-Men: First Class, and so raw in Shame. Yes, there's a reason so many of us think Academy Award nominee Michael Fassbender sounds a helluva lot better than, say, Academy Award nominee Jonah Hill.

But I digress. A Dangerous Method, directed with uncharacteristic understatement by David Cronenberg, examines the linked destinies of three formidable individuals through roughly the first two decades of the 20th century. There's Jung, of course, initially coming into his own armed with theories that hadn't really been explored before (among them the idea of the collective unconscious). There's Sigmund Freud (Viggo Mortensen), the penis-envy proponent who serves as Jung's mentor until their philosophies ultimately take them down divergent paths. Finally, there's the largely (and unjustly) forgotten Sabina Spielrein (Keira Knightley), who goes from being Jung's patient to his lover to, finally, a renowned psychologist in her own right.

An intelligent movie about intelligent people, A Dangerous Method finds most of its verbal jousts in the capable hands of both Fassbender and Mortensen, the latter portraying Freud as an unbending stuffed shirt who nevertheless manages to maintain a touch of the impious about him.

Less successful is Knightley: Jutting out her jaw to a frightening degree in the early scenes when Sabina is swallowed by her own hysterics - I was afraid the poor actress was going to dislocate the thing i she seems to have confused suffering with showboating, and while she becomes more believable as the film progresses, she never fully blends into the period setting as effectively as she did in Pride and Prejudice.

For all its strengths (for starters, Howard Shore's score is exquisite), A Dangerous Method never becomes much more than a pleasant watch, with its studied formalism preventing viewers from ever truly connecting to these characters' situations. Just because the setting is clinical doesn't mean the film itself needs to follow suit.

There's a towering performance in Albert Nobbs, and it sure as hell doesn't belong to Glenn Close.

A labor of love for the actress, Close not only stars in the picture but also serves as co-writer and co-producer (and, lest I forget, she also co-penned the theme song, "Lay Your Head Down"). Yet in essaying the title role, a lesbian in 19th century Ireland who has dressed up as a man for 30 years in order to work as a butler in a Dublin hotel, she isn't especially convincing: Even accepting that she looks a bit like a fey, mummified Stan Laurel, viewers have to assume that everybody in Ireland suffers from poor eyesight to fall for this ruse. Couple her turn with the fact that her character is never afforded much in the way of backstory or defining traits or - heck - even a pulse, and it's hard to invest any interest in her difficult life.

Albert Nobbs would be a slog if it wasn't for Janet McTeer. Like Close, she plays a woman who's spent years passing herself off in public as a man, and she's excellent in the part, allowing us access where Close only allows indifference. Her Hubert Page is a vibrant character, full of wisdom, inner strength (and external, as she makes her living as a house painter), life experience and passion (she shares a cottage with her lover Cathleen, played by former Commitments co-star Bronagh Gallagher).

Close only comes to life in her scenes opposite McTeer; the rest of the time, she unwisely fashions her character as a riddle wrapped in a mystery inside an enigma. And while that designation might have worked well for Russia (at least according to Churchill), it's not adequate for a movie purportedly about the woman behind the man.

MAN ON A LEDGE

For a flick that ended up getting shoved to January, Man on a Wire sure sports a cast that would look right at home on a year-end release date. Move past thudding lead Sam Worthington (still flailing about in his bid to become The Next Big Thing; dude, if Avatar and a Terminator sequel couldn't do it for ya ...) and filmgoers will find the likes of Ed Harris, Anthony Mackie, Elizabeth Banks, Jamie Bell and more. And it's a good thing for this film's makers that all concerned signed on the dotted line, since it gives considerable heft to a movie that otherwise might have gone straight to DVD.

Worthington plays Nick Cassidy, a wrongly incarcerated ex-cop who manages to escape from prison, thereby enabling him to put into motion a complex scheme in which his role is to ... well, check out the title. Banks stirs sympathy as a guilt-ridden police negotiator, Bell and Genesis Rodriguez make a cute couple as Nick's brother and his feisty squeeze, and Harris brings a dash of classy menace to his too-few scenes as a ruthless titan of industry. It's all fast-paced nonsense, easy to take but not quite engaging enough to warrant a night out at the movies. Yeah, best to wait for that DVD.

Appeasing everyone from your grandmother to your little sister, director Steven Soderbergh has populated Haywire with hunks of every age, starting with 67-year-old Michael Douglas and running through 51-year-old Antonio Banderas, 40-year-old Ewan McGregor, 34-year-old Michael Fassbender and 31-year-old Channing Tatum before bottoming out with 24-year-old Michael Angarano. I suppose we should thank scripter Lem Dobbs for not fashioning a role for 19-year-old Taylor Lautner to complete the spectrum.

Despite that dreamboat-heavy cast, this isn't a big-screen episode of Spartacus or a sequel to Gladiator, although its leading player is best known for TV's American Gladiators. That would be Gina Carano, the mixed martial arts fighter who made her mark in the arena usually under the moniker "Crush."

The plot of Haywire is nothing special: A government operative who has just successfully completed a mission gets betrayed by one (or more) of her colleagues and finds herself on the run. Carano displays some deft moves, Soderbergh directs in a cooly detached style (it's like A Dangerous Method for action junkies), and poor Channing Tatum is humbled as he emerges as the only one who's outacted by the MMA newbie.