After a year off, Music File Productions’ celebration of Southern soul, grit, and twang has returned to Georgia State Railroad Museum.

Live music is the festival’s heart, but the full day of activities is also characterized by delicious food, bourbons, and craft brews, making a rich and sensory experience of the bash.

Portland’s own Blitzen Trapper returns to Savannah. Music File Productions has previously brought the beloved folk-rock five-piece to town to perform a one-off show at The Jinx and headline Savannah Stopover Music Festival in 2016.

The band has released eight studio albums via Lidkercow Ltd., Sub Pop, and Vagrant and three live albums. In 2017, Blitzen Trapper will release Wild and Reckless, the anticipated follow-up to 2015’s All Across This Land.

Experience the music, tradition, and thrill of The Big Easy with Big Sam’s Funky Nation. Mixing funk, rock ‘n’ roll, hip-hop, and jazz, the group is led by former Dirty Dozen Brass Band member Big Sam. In his own group, Sam sings, rips on trombone, and leads his dynamic band. He prides the group on their ability to play for everyone and reach fans with varied musical tastes.

Joined by his favorite New Orleans players, including Andrew “Da Phessah” Baham on trumpet and vocals, Alfred Jordan on drums, Jerry “Jblakk” Henderson on bass, and Keenan McRae on guitar, Big Sam and his boys are ready to get the crowd moving and shaking.

Powerhouse Ruby and her band are keeping funk, soul, and Motown love alive. Check out our interview with Ms. Velle on page __.

He’s young, but Cale Tyson has an old soul. A love of vintage country shines through in his original stylings and on his 2017 record Careless Soul. Recorded at the legendary FAME studios in Muscle Shoals, Alabama, the record earned praise from country aficionados as well as titans of the industry like Rolling Stone.

Another returning favorite, Winston-Salem-based singer-songwriter Caleb Caudle, continues to earn widespread praise for his evocative Southern storytelling. He’s currently working on a new record, Crushed Coins, which will be released later this year. 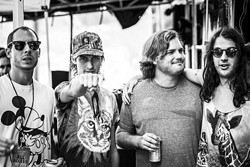 T. Hardy Morris has become a Savannah favorite. The Dead Confederate member has been involved in a variety of bands outside of the band that got him his big start, and Hardy & The Hardknocks showcases slide guitar, fuzz, and a full-band approach.

Nashville rockers Blackfoot Gypsies are regular visitors to Savannah’s club scene, so catching them in the unique setting of Georgia State Railroad Museum will be a unique opportunity. The quartet offers swamp-blues, hillbilly-funk, punk, and shades of classic rock. Founded by Matthew Paige and Zach Murphy, Blackfoot Gypsies released a new album, To the Top, in 2017. Songs like “Everybody’s Watching” and “Potatoes and Whiskey” are rocking roadhouse numbers primed for bourbon-shooting and dancing.

Savannah’s own “local boys done good” sound great playing their rollicking country rock on any stage, but a festival experience with ‘em is something else. Plus, The Train Wrecks in a museum dedicated to antique trains? Bring it on.

The Savannah group, led by Ray Lundy, brings the blues to the stage with raw spirit, harmonica riffing, and old-school flair.

A rotating cast of local musicians performs in Sweet Thunder Strolling Band, a laidback marching band most often seen leading the parade at the Flannery O’Connor Childhood Home’s birthday celebration. The band will perform throughout the day at Revival Fest.

It wouldn’t be Revival Fest without something to nosh and sip!

Sink your teeth into a gourmet grilled cheese sandwich.

Molly’s is a Savannah staple, and their truck serves up fresh favorites on wheels.

Cool down—it may be fall, but it’s still Savannah!—with a fresh, fruity pop.