Streaming info and tickets at quarantineconcerts.org

LOCAL punk rockers Jeff Two Names have been a staple in the local music scene for the last several years—as has Kevin "Rev Kev" Veitinger. Veitinger arrived in Savannah with his family over a decade ago, as a temporary landing place.

It ended up being his home until now, where he’s been the pastor at the Episcopal Community of St. Joseph.

And now, he’s moving on. Veitinger is prepping a move up to Briarcliff Manor, New York, where he accepted a pastor position at a church. Don’t worry, though—punk rock never dies, even when the drummer is hundreds of miles away.

“We’ll still do some touring and stuff, but this will definitely be the last show in Savannah for a while,” Veitinger tells Connect ahead of Jeff Two Names’ Quarantine Concert on May 6. The move, he says, is something his family was thinking about for a little while. 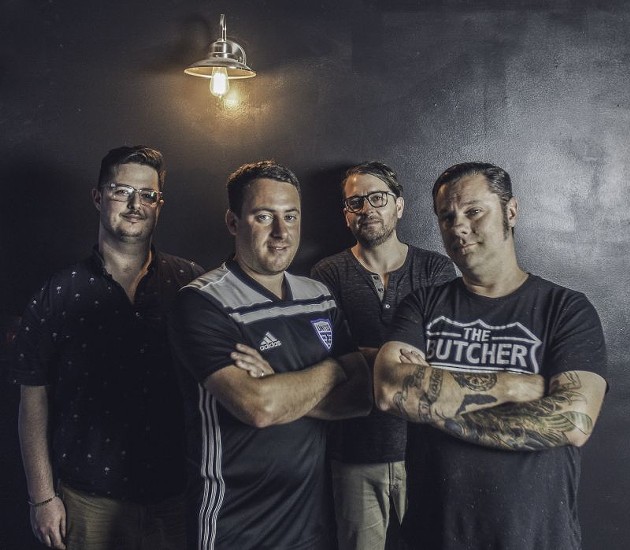 “Savannah was never going to be the place we stayed forever, but we’ve been here 14 years now,” he says. “Really and truly, our family kind of found our identity here. It’s been an amazing place that we are completely grateful for. Savannah will always be a part of who we are.”

Rev Kev says he applied to churches all over the world, but there was something about his soon-to-be home that felt like the right move. His family will be hitting the road for New York not long after his band’s upcoming concert.

Punk rock, Veitinger says, was something he’d been into all his life after studying classical percussion when he was young. His first exposure was The Ramones, who he heard through his dad. Later on, in high school, he discovered bands like NOFX and others from that particular era.

When he moved to Savannah, Kev met Jeff Storey-Pitts through soccer (Kev also officiated his wedding). The two hit it off, and ultimately formed a band through their shared love of punk rock. Jeff Two Names & the Born Agains (now just Jeff Two Names) was born.

Though he hasn’t often mixed his musical pursuits with his religious/professional work, he does see music as going hand in hand with faith and spirituality—even punk.

“I don’t buy into the separation of the sacred and the secular in that kind of way. Playing in this punk band has been one of the most important ministries I’ve had in Savannah. Being engaged with the punk scene here, being able to be a part of that community, has been an important part of my ministry really,” he says, specifically citing the memorial service he was part of at The Jinx for beloved Savannahian Niema Ross.

“When Niema passed away, we were able to do a memorial service for her. And that was a really incredible experience for me. It was an honor for me to be a part of it.”

Though he doesn’t often fuse his two roles, Kev insists that he doesn’t see a “dichotomy” between “punk rock Kevin and pastor Kevin.”

“It’s really all the same thing,” he says.

The band recently released its latest album, which is a collection of songs recorded at several studios around town. The album is classic Jeff Two Names, full of both the humor and energy that people have loved since the band started. The Quarantine Concert, streaming live on Facebook and quarantineconcerts.org on Wed., May 6, will be a celebration of that album as well as Kev’s departure from Savannah.

“I always believed that community was important, but I really was able to live into that here,” he says of his time in Savannah. It’s important for pastoral types to have a life outside of their church and to be engaged in the community outside of the church,” he says.

“Those were things that I believed on some level or had some kind of intrinsic understanding of, but I was able to live into those here in a way that was very formative. I think that in a lot of ways, my time in Savannah has formed me.”