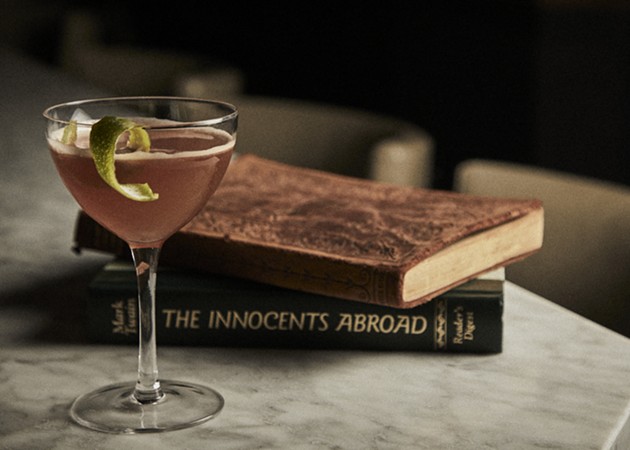 Photo courtesy of The Alida Hotel
The Lion's Tail is one of The Trade Room's newly concocted whiskey-based cocktails.
Long gone are the days of West River Street being a dark, dingy, much-forgotten piece of Savannah’s downtown. With the resurgence of craft cocktail bars, the memories of River Street being a place for grain-alcohol-based daiquiris are all but foregone thoughts of young locals sowing their wild oats. Because West River Street was once primarily an industrial site, most of it sat empty and abandoned for the longest time. In 2020, gravel lots transformed into booming boutique hotels, new chic storefronts, and a refashioning of the district. The cobblestones have never changed, but what makes up our historic riverfront has evolved into something completely new. For locals, this part of River Street is almost unrecognizable. In the depths of the reformation of this booming tourist destination, one bar has rebranded itself as well. The Trade Room located at The Alida Hotel has changed its menu to become the only whiskey bar in Savannah. For the Alida, the contemporary whiskey-forward bar list will hopefully sway more locals to enjoy the ever-transforming commodities of the waterfront district. Whiskey is simple − it is alcohol fermented from grain, distilled, then aged in barrels. The type of grain determines the type of whiskey. Everyone knows rye whiskey, which is created from rye grain. But let's be honest, whiskey is not the nip for everyone. At The Trade Room that could easily change for your average social drinker. “The goal was to really make it approachable. We were thinking we might have tourists from River Street, we might have our guests, we might have all the groups that are coming here, and we wanted to make it so it is more about learning and discovering,” explained Arthur Sertorio, the general manager of food and beverage.
click to enlarge 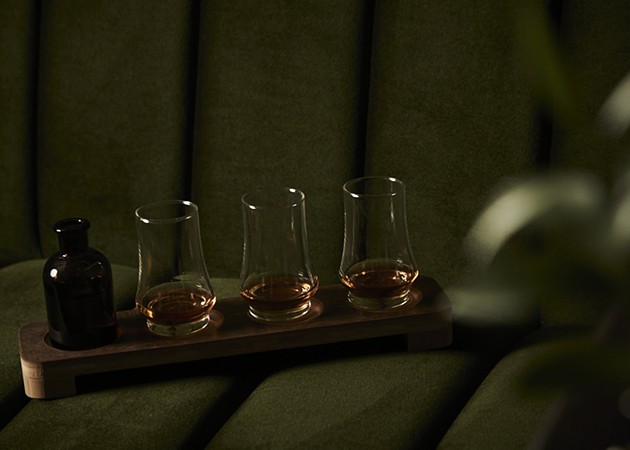 Photo courtesy of The Alida Hotel
A whiskey flight served by The Trade Room.
The Trade Room keeps things simple to introduce inexperienced whiskey drinkers into the realm of enthusiasm. The menu begins with House Cocktails as a way to wade slowly into the deep end. Sertorio told me, “We have the classic cocktails that we do, all with whiskeys. They are a play on the Old Fashioned, the Manhattan, and things like that. We are bringing our touch to it that makes it different.” The Trade Room Manhattan is created with house-blended vermouth, bitters, and Old Overholt Bonded Rye. The Forty Niner is made with Monkey Shoulder whiskey, honey, ginger, and lemon. A flight of whiskey, rye, bourbon, or Scotch is the next step for students to expand their learning. Flights start on the low end at $18 and walk their way up to more exclusive barrel-aged liquors that edge out at $38. With a flight, The Trade Room prepares three different whiskeys or Scotches that are paired in a way to educate the drinker. Served with the triple glasses is a dropper of water, included to open up the notes of each whiskey type. “We wanted to come up with the flights, and we took a long time to come up with what makes the most sense. We didn’t want your palate to be attacked so you couldn’t taste the third whiskey you are tasting,” said Sertorio.
click to enlarge 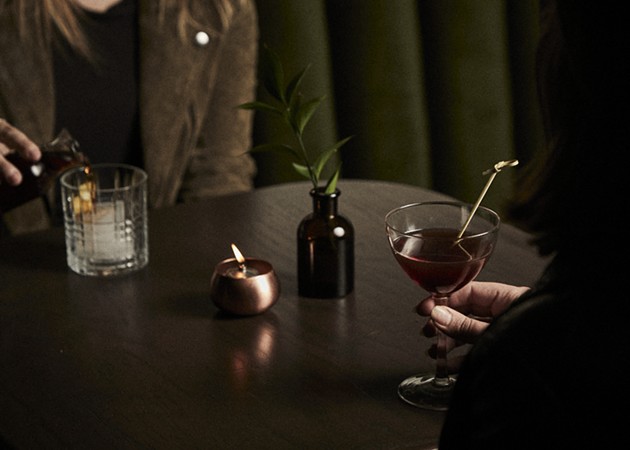 Photo courtesy of The Alida Hotel
Class served by the glass at The Trade Room.
Japanese whiskey has finally taken flight in America. The difference between American or Irish whiskey and its Japanese cousin comes in how it’s distilled. The process of double distilling the liquor before aging lends a flavor that is closer to that of Scotch. The Japanese flight features Nikka Coffey Grain, Suntory Hibiki Harmony, and Suntory Whisky Toki. If you have never tasted Japanese whiskey, a flight from The Trade Room is the ideal way to begin. The same can be said for the Scotch flight, a drink that can be considered sought by only the most savvy of drinkers. Many connoisseurs stay away from the peaty libation, but a flight is a great way to narrow down which drink your palate may like to start sipping. Most unique to this new barrel-aged bourbon bar is the choice to build a craft cocktail out of any of the 60-plus spirits. After narrowing down your favorite grog, turn it into a handmade mix for only $3 more. There is no better way to drink an Old Fashioned or Whiskey Sour than with the base of your liking. At the bottom of the menu’s list of brands, readers can find a scale of beverage notes. “We wanted to put each glass in four different ways of what we think will be the right way of categorizing them,” says Sertorio. Bar specialist Connor Gillette came up with the sliding scale of notes such as oak, corn, spice, and smoothness when creating the new menu for The Alida. Normally Macallan is a scotch I fall back on, and typically I felt sampling a different brand was mindless. I looked at the chart and was able to try a new brand of Scotch by comparing Macallan to it. An after-dinner cap at The Trade Room expanded my go-to brands for enjoying a neat glass. For guests who still are not convinced about the joys of whiskey, The Trade Room also offers wine, beer, and a few other essential liquors. Guests who tag along with a whiskey worshiper will not be left thirsty. With such strong libations at hand, the trendy bar has food available from its sister restaurant, Rhett. Mushroom Toast, Pimento Cheese Fritters, and Steak Frites are just a few samples of the expertly crafted menu created by Chef Jason Starnes. The Mushroom Toast is the standout. Foraged oyster mushrooms from Swampy Appleseed are paired with a warm melted Boursin and thyme, then spooned on top of toasted focaccia. To perfectly pair with the endless bottles of bourbon, The Trade Room is working towards launching a new munchies menu. Patrons can expect a standalone kitchen and menu to debut later this year, and will feature new items like handcrafted burgers. The Trade Room is located in the lobby of The Alida Hotel: 412 Williamson Street, Savannah. Visit thealidahotel.com for more details.