The founder of Resilient Magazine shares her inspirations and goals 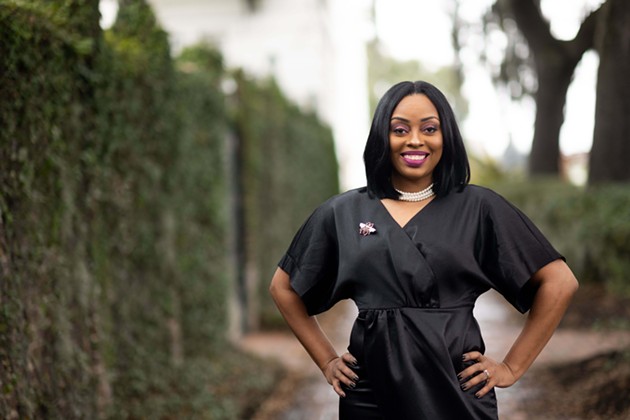 Courtesy of Teia Acker
Savannah native Teia Acker is a modern-day speaker, radio and podcast host, and businesswoman.
The celebration of Black history is not just a February-long observance − it is the celebration of Black lives from the past, future, and present. Savannah native Teia Acker is a modern-day speaker, radio and podcast host, and businesswoman who owns Ebony & Ivory Professional Service, LLC, Resilient Magazine, and the Moore Books digital bookstore along with her husband, James Moore. Acker started Ebony and Ivory Professional Services in 2013 during a trying time in her life. In June of 2020, Acker published a spinoff medium of Ebony & Ivory, Resilient Magazine, to highlight the resilience of women, their work, their worth, and their ability to overcome the barriers life brings. Amidst 2020’s social and political disparities all during the COVID-19 global pandemic, the magazine climbed to over 8,000 digital subscribers and more than 200 print subscribers, including 62 businesses, within eight months. CS: Can you give us an overview of who you are and what you do? TA: I am a native of Savannah. I am married and I have a 12-year-old son and a 10-year-old daughter. I attended Robert W. Groves High School. I got a dual bachelor’s in kinesiology and health science/community health from Georgia Southern University, as well as my MBA from the University of Phoenix. I am a multi-business owner, and I am also an employee. I own Ebony & Ivory Professional Service, LLC. It has been around for seven years as of July 25, and the goal of that company is to be the launch pad for smaller businesses. We help them get noticed by doing things that will pivot businesses to stand out. I also do development training for people that do not want to be entrepreneurs, but instead want to climb some corporate ladder. I also own Resilient Magazine, which is a spin-off of Ebony & Ivory. CS: Why did you launch Resilient Magazine? TA: Anything that the average woman and the educated Black woman could experience, I have been through. I can relate to anything outside of a terminal disease. Though COVID-19 in 2020 had been the true test-dummy of resilience for all, I had my personal pandemic back in 2013. I experienced getting divorced, being a single mom, dating to find a good father for my son and daughter, being laid off, and going from security to poverty in less than 90 days. I have experienced losing a parent. When my father died my world turned upside down. I was a daddy’s girl. I started Resilient Magazine because I know I’m not the only one, and I aim to be a real model, not just a role model. There is somebody who is looking for an outlet but they don’t have one, or there is a woman who makes everything possible happen for her family but no one knows because she’s not in the mainstream. I decided to start the magazine so that everyday women just like myself feel appreciated for what they do. I also wanted it to look like O Magazine, Essence, and Ebony, because it does not matter your occupation or background, excellence is just that.

"They just want to hear that someone else has been through what they’re going through to motivate them, so that motivates me to keep telling my truth, being transparent and owning every error and mistake. I’m fueled by the fact that it’s not about me."

CS: You aim to inspire many. How do you stay inspired? TA: It’s a lot of prayer, and I am very intentional. I get my inspiration from the Bible, T.D. Jakes, Sarah Jakes Roberts, Oprah, and knowing why I’m here. Knowing that next month’s issue is going to talk about another woman and it will have 80 pages of pure content about Black excellence − that motivates me. Or when I see that someone has signed up for a two-year subscription of my magazine. Or when I meet someone and they’re like, ‘I just don’t know what else to do with my kids, or my parent passed,’ and I say ‘Oh, I lost a parent too, or I’ve been divorced, also.’ They just want to hear that someone else has been through what they’re going through to motivate them, so that motivates me to keep telling my truth, being transparent and owning every error and mistake. I’m fueled by the fact that it’s not about me. CS: How many people subscribe to Resilient Magazine? TA: It’s a steady climb, but when February’s issue dropped, we had 8,002 digital subscribers and we have about 200+ subscribers for the hard copies. I never expected it to take off like this. I anticipated it, but I don’t set expectations because I don’t like my feelings being hurt, but it was unreal. CS: So you’re climbing this mountain. What does the other side of it look like for you? TA: On the other side of that mountain looks like a place of rest, and what I mean by that is, I’m building all of this for others. I build small businesses so that small businesses can build small businesses. I’m building Resilient Magazine so that the resilient women can build other resilient women. I’m not doing this for the 50-year plaque, or the street named after me, or any of those things. I want to see the longevity in everything that I do, but I do not intend to work so hard at it like this forever. I’m working now so I can rest later, and later is not necessarily old age. Later is when I get to that point where Oprah is holding my magazine. Yes, the magazine will continue on after, but that would have been the upper echelon of my career. For example, I wrote a small article in January’s magazine about Vice President Kamala Harris being Vice President. I had no idea that someone would put me in a position where I could make sure that she got that copy when she came out to Savannah for the campaign rally. When I say that I am being intentional, it is so that I can always be in position, so when you’re talking about the mountain, I’m climbing it to be in position to pass my magazine on to the next person. I am a launch pad. Visit teiaacker.com to find out more about Acker and Resilient Magazine.