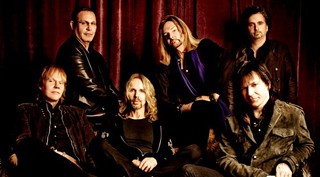 In rock ‘n’ roll, as in life, the only constant is change.

The Chicago–based band Styx has followed an extraordinarily complex evolutionary road. Founded in the early 1970s by singer/pianist Dennis DeYoung and lead guitarist James “JY” Young, both of them songwriters with big visions (and big egos), Styx landed on a winning formula when the two mainstays learned to play to one another’s strengths (DeYoung as a balladeer with a taste for the theatrical, Young a rocker with an ear for the big, catchy riff).

DeYoung’s “Lady,” from Styx II, shows us the blueprint for what was to be one of the defining sounds 1970s FM radio – starting as a tender ballad, it quickly accelerates into a sonic blast of tough guitar and drums and an electric wall of thickly–layered vocal harmonies.

It was the ‘70s, it was sophisticated arena–rock, and Styx had four consecutive multi–platinum albums.

Things went into overdrive when second guitarist Tommy Shaw joined the band, and his songs – including “Renegade,” “Fooling Yourself,” “Blue Collar Man” and “Mademoiselle” – brought the quality level even higher.

Most of Styx’s biggest chart hits, however, were written and lead–sung by DeYoung, including “Lady,” “Come Sail Away,” “The Grand Illusion,” “The Best of Times” and the band’s only chart–topping single, the decidedly non–rock ‘n’ roll “Babe.”

All this cross–pollination took its toll on Styx, with DeYoung’s futuristic rock opera Kilroy Was Here (1983) rubbing Young, Shaw and the other members of the band entirely the wrong way. “Mr. Roboto,” the heavily computerized single from Kilroy, was not received enthusiastically by anybody. The next step was mutiny, with DeYoung tossed unceremoniously from his own band.

A brief olive–branch reunion with DeYoung in 1999 brought out the old animosities, and today Young and Shaw perform as Styx, with drummer Todd Sucherman, keyboardist Lawrence Gowan and bassist Ricky Phillips. From all reports, it’s a very high–energy show.

Let’s rewind: At the dawn of the 1970s, Panozzo and his twin brother John (on drums) were playing with DeYoung in the southside Chicago band TW4, when they went looking for a new guitarist. James Young, who just come out of college with a degree in mechanical engineering, turned up to audition.

And that moment, so long ago, is where we begin our interview with JY.

“My band did cutting–edge deep tracks, obscure album tracks and our own originals, whereas Dennis and the Panozzos played pop songs that everybody wanted to hear. And they were making money. I had never seen them play, but I sort of looked down on anybody who did what they did. My band broke up, and I heard they were looking for a guitar player. I just wanted to be a working musician. When Dennis recounts it today, he says that I was the most arrogant human being he’d ever met in his life. And I probably was.”

“I was the guy who had the most songs on the first record, but then Dennis jumped in and became a writing machine. He took the banner up, and ran with it in a way that I was incapable of. The combination of those elements, onstage, somehow really started turning people’s heads. All the bases were covered, and my own narrow vision was broadened, which was a good thing. And their broad vision was refined. We all brought our separate gifts to the table, but when we combined them we really had something good. Dennis and I were very different individuals, but collectively, there’s something about my voice in those block harmonies. That sounds like Styx.”

“I’m a controlling person, Dennis is a controlling person. He enjoyed mastery over the rest of us through the Grand Illusion album and up until Pieces of Eight. Because ‘Lady,’ he wrote and sang. That’s a home run, and none of the rest of us did that. So he deserved to be listened to. And then Tommy came in, with Crystal Ball, and then on Pieces of Eight the two biggest songs were Tommy Shaw songs. I think that freaked Dennis out. ‘Renegade’ was anthemic rock that just hammered from the start. And Dennis really had nothing that rose to the top on Pieces of Eight.”

“Once Tommy had launched himself into the Number One slot, in a way, or at least it was a serious challenge to Dennis’ authority, I feel that Dennis turned to what his strength was. And that was writing emotional songs to women. For me, that was a very hard left turn on the wheel. And then ‘Mr. Roboto’ was an incredibly even further turn on the wheel. Dennis is not a rock writer, and whenever he tries to write a rock song on his own it doesn’t really get there. There was another guy hitting home runs on the team; he wasn’t the only guy who could move the ball around the bases.”

“As arrogant as I may have been, Dennis taught me the lesson of humility. And me being a practical guy with an engineering background, it’s about problem–solving – collectively, I learned that I’ve got to compromise a little bit, but compromise can lead to success. Unfortunately, the lesson of compromise was something that Dennis had a harder time with. So he went away from rock ‘n’ roll to try and find success. I know ‘Babe’ alienated a lot of our audience – of course, it built another audience – and the ironic thing is that ‘Roboto’ kind of killed our audience.”

“It’s still the highest high I’ve ever achieved. When we play in front of 30,000 people, like we did in Omaha last year, or 50,000 in Quebec City, and I’m standing up there with my Stratocaster playing solos to beat the band, and people are singing along ... I’m doing something I love in my very, very, very late 50s. What Styx has, and what Styx brings, comes from a higher place. And it flows through us. Music is just this incredible force that has the power to soothe, to calm, to inspire, and in the best cases to heal and motivate. We are the stewards to this incredible power.”