Get down to Swingtown at the Lucas this Thursday

With a Twist: Summer Cabaret Series

Where: Lucas Theatre for the Arts 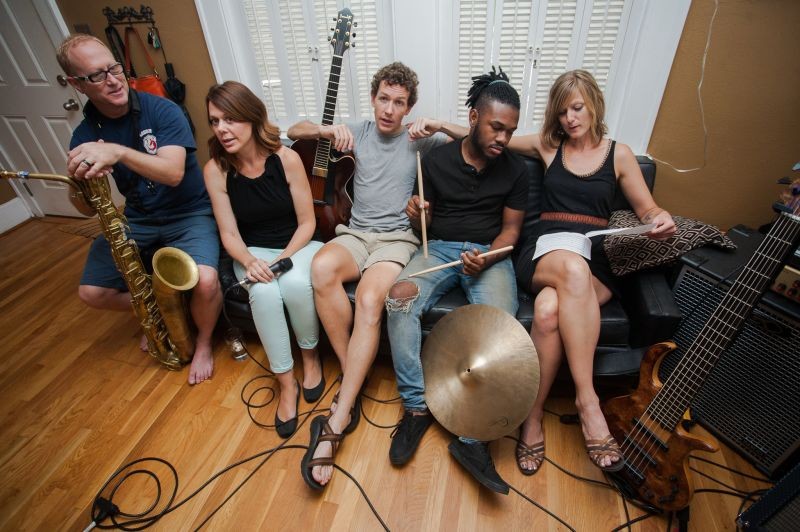 Jon Waits | @jwaitsphoto
The "With A Twist" cast in rehearsals.

NATASHA DRENA is all smiles as we weave our way back to the Lucas Theatre’s green room. The historic venue’s On Stage Cabaret, a hit summer series featuring local musical luminaries in a stunning yet low-key environment, is in its fourth season. What began as an unusual, think-outside-the-box concept has evolved into the hippest date night in town, with locals snapping up season passes and shows selling out before posters can even be made.

“It’s crazy,” says Drena, an in-demand vocalist who’s been with the series since the beginning and serves as On Stage Cabaret’s Artistic Director.

The idea to seat an audience right on the Lucas stage while musicians play an intimate set before them was a road trip musing carried out to the fullest.

[Lucas Theatre Director] David Harris and I were in the car on the way to Disney World,” Drena remembers. “He had just met [pianist] Kim Steiner and said, ‘I’ve got this idea. I finally found a piano player...we could turn it around, but I don’t know how to do it.’ I did cabarets all the time in New York, so I said, ‘I could help!’ We literally mapped out the first show in the four-hour drive to Orlando.”

“Cabaret” can summon a variety of sepia-toned imagery; for The Lucas, the focus is an elevated, intimate performance.

“If you look at the French or New York cabaret scene, table service is a thing,” Drena says. “Sometimes, it’s stadium seating. It’s whatever you want to make it into. We can set up whatever we want! Once you put the musician on the stage, there’s cabaret-type music, and there’s an actual cabaret-type venue. But they’re all different. For me, cabaret is about letting artists show people who they are personally, versus the façade that they show as a wedding band or as an actor. My personal mission is that the audience members get to know our performers as people.”

Drena will be singing in what’s perhaps On Stage Cabaret’s most creative night yet, joining jazz guitarist/vocalist Jackson Evans, vocalist/bassist Maggie Evans, drummer Robert Britton Saunders, and a horn section featuring Calvin Barnes and Jody Espina. While they find themselves playing the same venues and often attracting similar audiences, this collaboration is a first, and all parties are excited to unveil a truly eclectic evening of music.

“[Natasha] wanted to do something a little out of the norm for them,” Jackson Evans explains. “The idea is to take rock ‘n’ roll and pop songs and put them through a jazz viewfinder.” 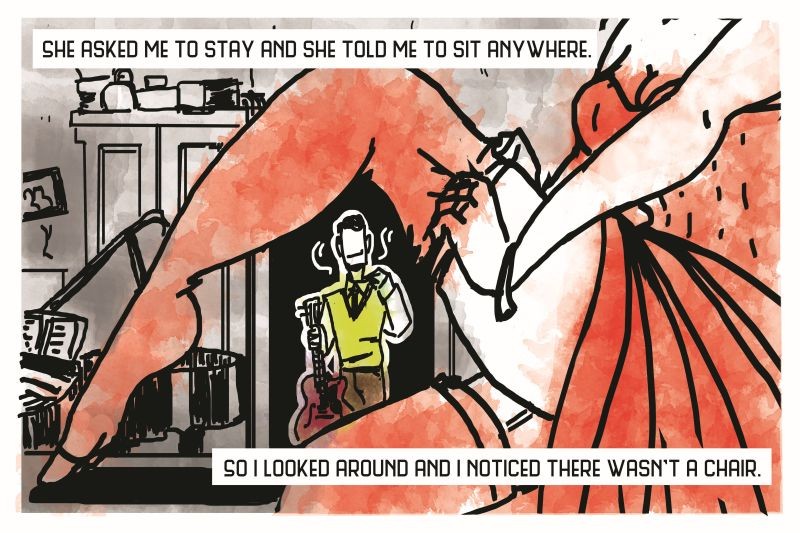 Ash Walsh
SCAD alum Ash Walsh created the comic book that accompanies "With A Twist." Pictured is a take on the Beatles' "Norwegian Wood," which will be performed on Thursday.

“Historically, that’s what jazz has done,” he points out. “All the standards, the American Songbook, those were musical songs first, they came off of Broadway, then they got put through the jazz filter. That’s the tradition of jazz in the first place. But those standards stayed in place through the rock ‘n’ roll revolution. Not until recently did bands like The Bad Plus or any number of young, up-and-coming jazz musicians have the talent and the idea of, ‘Those guys did that with popular music—why can’t we do that with Nirvana? Why can’t we do that with Rush? Why can’t we create the same concept with more contemporary music?’”

“With A Twist” shows off fresh arrangements of songs from the ’60-‘80s, but there are some selections in the program that are even more recent.

Rising Australian singer-songwriter Vance Joy’s sweeping love ballad “Mess Is Mine” gets the jazz treatment, as does happy-go-lucky hippie-romance anthem “Home” by Edward Sharpe and the Magnetic Zeroes. There’s even a little Nirvana sprinkled in there.

“I’m singing ‘Black Dog’ by Led Zeppelin with a swing arrangement!” Drena cries. “I used to listen to that in the car on the way to high school!”

“Probably the most fun one to arrange was ‘Dr. Feelgood’ by Mötley Crüe,” Evans laughs. “We’re doing it gypsy-swing style.”

There’s a storytelling element to the show, as well—a first for On Stage Cabaret.

“I wrote the playlist out with a plotline,” Evans explains. “There’s a little love triangle situation going on. the characters are represented roughly by each singer, and the plot that goes with the songs has been illustrated, so everyone will have a comic book to go along with it. The whole thing takes place in Swingtown, which is a city where all the rock ‘n’ roll you know and love happened, but it didn’t happen as rock ‘n’ roll. The jazz sensibility stuck around through the ‘50s, ‘60s, ‘70s, and ‘80s, and didn’t switch off like it did in real life.”

“We couldn’t have done this without Jackson,” Drena praises. “There’s nobody else whose brain could do all that he’s done!”

Drena recommends getting tickets in advance for “With A Twist” and notes that there are still half-season passes left for folks who want to make On Stage Cabaret a weekly tradition.

If you’ve only seen the Lucas from its wooden seats, take advantage of this rare opportunity to be perched onstage like a star. And, like all On Stage Cabarets, this particular lineup playing these particular arrangements will never happen again, making the event all the more special.

“I always like to say that it’s an intimate performance in a grand space,” Drena says. “If you’ve ever wanted to know what it was like from the performer’s perspective, you get to come in the back door, use the star dressing room, sit onstage looking out at empty seats. That’s what a lot of people think the price of admission is worth, just stepping onstage at The Lucas.”

First and foremost, it’s going to be an entertaining night for all.

“With tons of creative freedom, it’s just been fun,” says Evans. “The Lucas has been so supportive. It’s going to be really fun—don’t miss out.”