Garden Giant formed in Savannah, and still feels like a Savannah band, but its members are currently spread apart in various cities. Determined to stay together and continue creating despite the physical distance between them, the band recently finished, mixed, and released Kitty Kats & Rattlesnakes, their second album.

Guitarist and singer Devin Smith is effectively the leader of the band, and currently lives in Atlanta where he runs Volition Studios—the commercial studio he started after working out of his house in Savannah for many years.

It was at both locations where the band’s latest effort was recorded. Smith, alongside drummer Luis Salazar (currently in New Orleans) and bassist Bradford Shields (still in Savannah), spent the last couple of years putting the music together and recording the album before things were essentially put on pause. Quarantine prompted Smith to open the sessions and finish the project, and the results are a compelling slice of indie rock.

We spoke to Smith about the album and the process of continuing Garden Giant remotely. 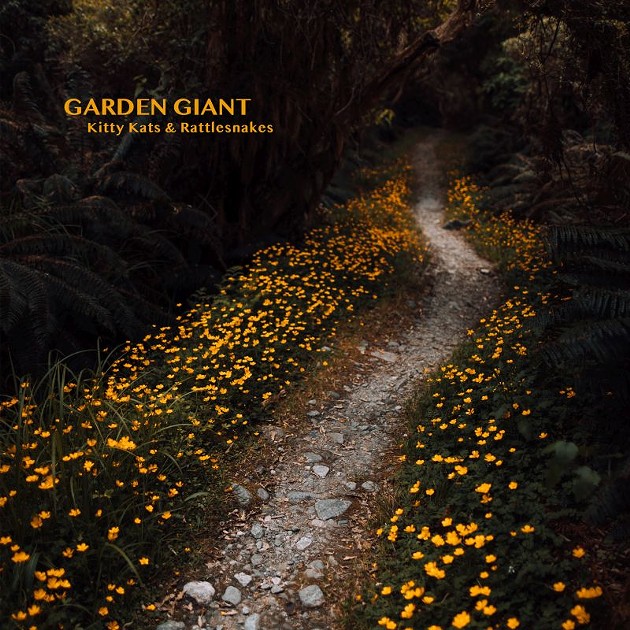 How exactly did this record get finished, and how long did it take to complete?

Most of this album was recorded in Savannah, and then it was basically just the vocals and final mix/master that I did up here. Really just the last 10 days or so.

I work well with deadlines, and we had no deadline, so it kind of got put on the backburner because I had plenty of things going on. But with COVID, I had no more excuses [laughs].

Was it written over a long period of time, or was it condensed with the goal of writing a record? Did you go back and rework anything upon re-opening the recordings?

So, we met in 2014 and that’s when we started playing as a band. We put a record out in ‘16 and played shows, you know, every few months. Most of these songs, I’d say, were written by 2017. Everything was ironed out already, and all of the instruments were recorded by May of 2018 because Luis left in June.

It was just sitting pretty much unmixed, and maybe some vocals have matured or adapted over those couple of years of hearing the instrumental tracks. But writing wise, it was already completed.

Honestly, after two years there’s a layer of nostalgia for something that hadn’t even been made yet. So I was very happy with how everything sounded [after two years]. And I had new ears in the new studio, in terms of mixing and sculpting it.

A lot of times, bands tend to get together and bond over shared influences. Was there any of that with y’all? How exactly did you meet?

We like Arcade Fire, and sort of cliche-sounding indie rock references. But overall I don’t think it was music so much as just friendship that really kept us together. We all played in different projects before. I came from more of a folk type of thing, and Brad I think was a little more punk. Brad and Luis actually met on Craigslist, and they’d gotten together and started playing. I met them at a music video shoot that I was directing, and I just chose two random people together to fight next to a bathroom. It ended up being them, and we just talked later that night.

We all have very vast libraries of music that we listen to; I don’t think we’re super pigeonholed in that way. So when it got to us playing together, we sort of got jam band-y. Long songs that we’d then narrow down and say, “Oh, that part’s good. Let’s do something with that.”

The record is really cool because it really sounds very faithful to the three-piece lineup, with the exception of the occasional overdub. That’s really hard to do on a record in terms of making it sound full enough.

Yeah, absolutely. Luis keeps a little sampler next to his drum set, and he would load up triggers. So actually, pretty much every sound you hear is live as well.

My experience with recording in the past, with a project I had with Anna Chandler called General Oglethorpe & the Panhandlers—when we recorded, we were going to do everything we could [laughs]. We ended up maybe overcrowding some things. Maybe it’s just a maturity thing.

But yeah, the realization of leaving your brushstrokes and not adding too much is definitely on this album.

Do you have a favorite?

“People In The Corner” might be my favorite song so far.

That’s interesting—I’m getting a lot of good feedback from that song, and I think it’s the poppiest song we’ve ever done [laughs]. It’s interesting, especially if you listen to what we sounded like when we first started playing shows. We were very grungy [laughs].

As a listener, it feels like this is a record made by a band that hasn’t reached its peak yet. Do you feel that, even as you’re living in different places?

I think we’ve got a lot of things left to do. We have probably another album’s worth of songs that we’ve written but not recorded. That might fall to the wayside because of how our new process work. Luis is creating a bunch of samples in NOLA right now, and Brad can just do anything. Whatever Luis and I start to do, Brad can make it better.