Marathon now in its seventh year

Marathon and Half Marathon begin 7:30 a.m. at Bay and Bull on Saturday Nov. 4; Fitz and the Tantrums scheduled for noon in Forsyth Park.

Photo courtesy of The Competitor Group

NOW IN its seventh year, the Rock 'n’ Roll Marathon and Half Marathon will bring participants from all 50 states and 15 countries to Savannah for the event.

“Over the years we’ve worked hard to add more miles downtown, around the historic squares,” says Dan Cruz of the The Competitor Group, which owns the brand and organizes the event.

“And our finish line in Savannah is seriously one of the most popular finishing venues of all our Marathons around the country. That swath of grass, and the relaxed setting, and how the city sort of becomes a beer garden post-race.”

Aside from crowds of onlookers cheering on runners and bands on multiple stages along the route, the main public component of the Marathon is the big post-run concert in Forsyth Park, which is free and open to the public.

This year’s booking of Fitz and the Tantrums is arguably the biggest name the event has brought to Savannah.

“With Old Crow Medicine Show last year, we noticed the whole community came out. And this year we have Fitz and the Tantrums, one of the most successful bands over the last ten years,” says Cruz.

Another new twist will be food trucks in Forsyth Park for the post-race party.

Cruz says the Marathon has a particularly special presence in Savannah, which is the smallest single market that hosts the event.

“The Savannah race is heads up with the New York Marathon the same weekend, which is the largest marathon in the world. So we will rarely have the incredible athletes down here, because the best marathoners are in New York that weekend,” explains Cruz.

“We envision the Savannah event more like a community block party. The partnership with Savannah State University has been especially important. The students come out and high-five the runners, and the cheerleaders are out too. The SSU segment really puts a pep in their step in what are usually the doldrum miles in a marathon,” Cruz says. 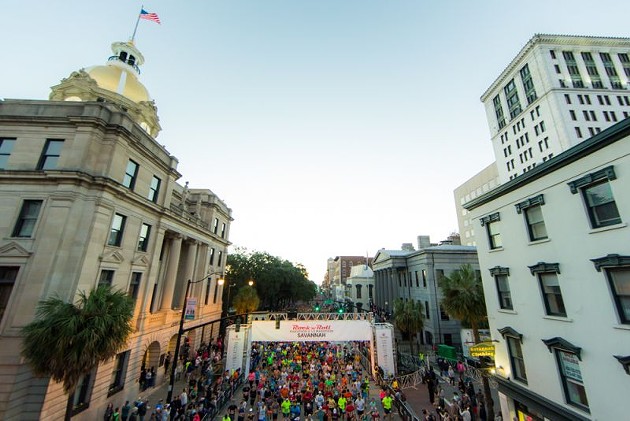 Photo courtesy of The Competitor Group

This year is a particular logistical challenge: the Marathon happens the same day as the final day of the SCAD Savannah Film Festival.

“ I feel confident all the right parties are talking to each other. The Competitor Group works really hard to keep everything well organized. They will start to clean up Bay Street before the first runners even cross the finish line,” says Marinelli.

“It’s incredible how far it’s come when you think about the earliest conversations about bringing it here. It’s gone well beyond just filling hotel rooms for a weekend,” says Marinelli.

Speaking of hotel rooms: The Rock ‘n’ Roll Marathon is responsible for about 18,000 bookings locally over the course of the event, Marinelli says.

“Our original intent in bringing the Marathon to Savannah was to identify an event opportunity to stimulate visitor traffic in a month where typically we didn’t see that. Mission accomplished,” says Marinelli.

“Now you have the Savannah Food and Wine Festival immediately following the Marathon weekend,” he says. “Where the fall tourism season used to end with the Film Festival and Halloween, now it stretches at least another two weeks.”

A key advantage of the Marathon, Marinelli says, is the demographic it attracts.

“Sixty-seven percent of participants are females between 25-55. That is exactly the demographic we spend the entire rest of the year marketing to: The female buyer who dictates the romantic weekend getaway or the girl’s getaway,” says Marinelli.

“They come for the Marathon, and then they tend to come back in the future – not necessarily for another race but as a regular tourist.”

The Marathon has come under fire from some due to the fact that taxpayers pay thousands a year to the for-profit The Competitor Group to bring the event here.

“It’s a simple marketing investment. The Competitor Group produces the Rock ‘n’ Roll Marathon in first-tier cities all around the country as well as international cities. They promote these cities to participants in their events all around the world,” explains Marinelli.

“We can’t afford for Visit Savannah to market in all those destinations year-round. So this little bit of financial outlay is terrific marketing for the city.”

The Savannah event has a few key selling points for Marathon runners, in addition to the scenic beauty and the hospitality.

The Savannah Rock ‘n’ Roll Marathon is the last qualifier race for the Boston Marathon, and its combination of comparatively flat terrain and generally pleasant weather makes it easier to log a really good time.

That said, organizers say about one in five participants has never run a marathon before.

“People get involved in running for all kinds of reasons, whether to lose weight, or for camaraderie, or after a life-changing situation like a divorce,” muses Cruz.

“And also you have to remember, it’s still a race. There are people who want to win.”