Where: From the historic district through Truman Parkway 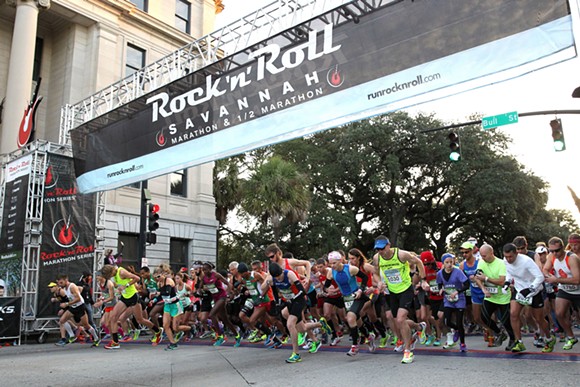 SINCE coming here six years ago, the Savannah Rock 'n’ Roll Marathon has logged more than a few hard miles.

In the race’s inaugural year, the prospect of ferrying 19,000-plus runners from Bay Street to Hutchinson Island to check in on the Friday before marathon day became an instant headache, bringing the north end of the historic district to a standstill.

Three deaths in five races have been a tragic reminder of the enormity of this undertaking—the first person ever to run 26.2 miles, Pheidippides in 490 BC, drew his final breath at the finish line (his last words were, reportedly, “Joy to you.”)

And last year, temperatures 10 degrees above average and heat-related illnesses forced organizers to shorten the back end of the course for many runners, robbing them of their milestone pursuit in exchange for rainchecks.

“Last year was really a challenge because of the unseasonably warm weather,” admits race spokesperson Dan Cruz. “It was like running in soup. We’ve learned a lot in five years in Savannah.

“We heard last year wasn’t up to our standards,” he continues, “so we’ve spent every day since then learning about what we can do better. We’re going to put on our best one yet.”

As compared to other race locales—Rock ‘n’ Roll now has events in 30 locations worldwide—Savannah presents a couple of distinct challenges.

One is its small size relative to other communities in the series, such as Las Vegas and Mexico City, where the long course can loop and sprawl through popular neighborhoods.

In contrast, the Savannah race takes the shape of a tapeworm, slinking west on old Bay Street before winding back through the historic district on several intestinal passes that require extensive road closures.

Some of that slinkiness is a response to complaints logged in the marathon’s first few years by out-of-towners who felt the course didn’t incorporate enough of the city’s historic sights.

“There’s just no question this is America’s first and finest planned community,” Cruz says. “With all the beautiful squares, we’ve added a lot more mileage downtown to showcase the historicity. ... This year we’re trying to hit more of the squares to give a good view of Savannah.”

Another challenge: those Friday afternoon backups on the riverfront as a majority of participants wait until the last minute to check in.

“I think it’s the only marathon I’m aware of in the U.S. that you need to take a ferry across a river to pick up your race card,” says event manager Devin Gneiting. “We’ll have extra ferries running and Old Town Trolley shuttles. We have a traffic plan in place with an outside company to manage traffic flow onto the island.”

Of course, not all the riverfront congestion is from race participants. The marathon’s free health and fitness expo on Thursday and Friday draws thousands of locals to the Savannah International Trade & Convention Center, too, highlighting one of the many positives the Rock ‘n’ Roll series has brought to our shores.

The free finish-line concert in Forsyth Park, which this year features Old Crow Medicine Show, has also been warmly received. And more than 20 live music stages peppered across the course provide ample venues for local musicians to display their talent.

But the race’s biggest gift to Savannah continues to be its contribution of outside dollars to the area economy.

“An independent study done by San Diego State University for race weekend each year suggests that nearly $30 million is spent in our community over the five-day period,” says Visit Savannah president Joe Marinelli, noting the event is currently signed through 2018.

With millions of tourism dollars recently lost to Hurricane Matthew, the city’s big game couldn’t come at a better time.

“We’re going to fill up those hotel rooms after the community was so impacted by the storm,” says an excited Cruz. “We know we can be this big, special event.

“People run for different reasons,” he continues. “To lose weight, to complete a race in every state. We’ve got more than 400 runners from St. Jude (Children’s Research) Hospital raising $100,000 to fight childhood cancer.” What unites them is a common goal of enduring the impossible, come hell or high water.

And right now, Savannahians can certainly relate to that.