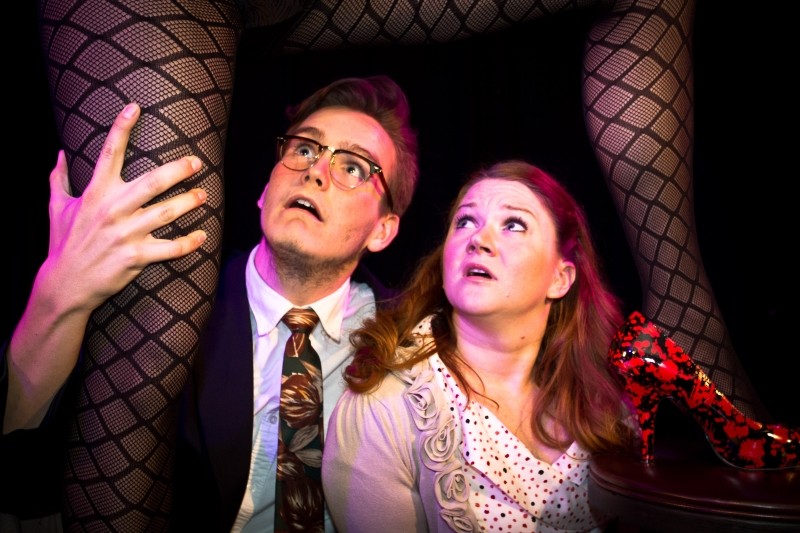 Hitting its 40th anniversary in 2014, The Rocky Horror Show, arguably the most well-loved cult classic of all time, is still hot to trot.

A lot of camp entertainment, if we’re being honest, doesn’t age well—datedness often plays a key role in camp appeal—but Richard O’Brien’s masterpiece still feels just as edgy, just as fresh, and just as hilariously entertaining as the year it debuted.

The 1975 film adaptation The Rocky Horror Picture Show made an icon out of Tim Curry as the “Sweet Transvestite” Dr. Frank-N-Furter, eternally fabulous in a corset, thigh-high fishnets, chunky pearls and pumps.

Seeing the live production, a screening of the film, or a shadow cast (in which fans perform scenes from the film in front of the screen) is a rite of passage into theatre, queer, and alt culture.

How’s a musical that combines comedy, B-movie horror, gender play, and 1950s rock ‘n’ roll continue to sell out after all these years?

As Stage Manager of Bay Street Theatre’s sixth production of The Rocky Horror Show, he’s seen the house pack out every October with locals and tourists, costumed from head to toe for the occasion (lots of French maids, and occasionally a brave, white-hot blond, gold Speedo-clad Rocky, if you’re wondering).

“You gotta think about when it came out,” Coles, who also plays The Narrator, continues.

“It was at the peak of the sexual revolution. And every generation experiences that; I think that’s what has kept it popular.”

Adds Bay Street Theatre’s Art Director Valerie Lavelle, who stars as The Usherette and helps out in a variety of capacities backstage: “It’s one that celebrates being weird, and being who you are.”

Directed by Timothy Reynolds, who’s handled directorial duties for Bay Street’s acclaimed productions of Reefer Madness and Speech and Debate, Rocky will feature a cast of Bay Street regulars and newcomers. Actors from all walks of life have united to tell the tale of lovebirds Janet Weiss and Brad Majors breaking down and stumbling into the wild world of Dr. Frank-N-Furter and his minions.

SCAD Performing Arts students, Savannah Children’s Theatre actors, professionals from the area, and even people with no theatre history comprise a lineup that Reynolds, Coles, and Lavelle are all excited to welcome to the stage.

It’s almost all new folks,” says Coles. “This is the most virgin cast we’ve ever had.”

A large part of the Rocky—and Bay Street Theatre—tradition is trading off roles.

“Having SCAD here also helps us continue to thrive every year,” Coles elaborates. “One, when we get them as freshmen, they tend to stay with us until graduation. But it also means that every year we get a fresh crop of energetic and happy people to come and join us here.”

Reynolds villainously drums his fingers together and emits a malevolent laugh. “People who don’t know any better!” he roars, cutting out of character to add, “it’s nice to have fresh faces around year after year.”

Though the antics run aplenty and there’s a little room for twists and some pop culture satire—Coles, as Riff Raff last year, donned a flesh-tone two-piece and a giant foam finger as a hysterical nod to Miley Cyrus’s infamous VMA performance—they remain true to the script.

“There’s a little room for improvisation, but it’s a little more controlled than I think people realize,” says Reynolds.

“We don’t change the words or anything,” Coles explains. “It’s more interpretation of the characters.”

“There are certain things that the audience wants to see and is there to see,” adds Lavelle. “Like, Frank should be in a corset. You know what I mean? Thinks like that, it’s canon to have, and we don’t want to deny the audience that. Everything else, we like to have fun with.”

Audience participation, a staple of Rocky performances, is vital in keeping the tradition alive. Through props are not allowed, there will be plenty of revelry for all.

“There’s the callbacks that the audience is prepared to do, and we try to have the actors prepared as well,” Reynolds says. “The Narrator and Frank-N-Furter are allowed to respond back.”

“It always got a little bit out of hand, in the best of ways,” Reynolds remembers with a wry grin.

They expect an audience of Bay Street Theatre regulars, Savannah visitors, and even fans from Atlanta and Florida, who make annual pilgrimages for the show.

“I think the audience is the whole reason we do it,” says Reynolds.

Bay Street Theatre’s convenient location inside Club One on (you guessed it), Bay Street, garners a lot of foot traffic from tourists making their way from Congress Street to River Street.

A giant banner, emblazoned with the iconic Rocky lips, helps spread the word. Despite the show’s legacy and notoriety, the crew still finds that they can surprise newcomers.

“There have been years where you look out into the audience and there’s this one person, and this look comes over their face like, ‘what have I gotten into?’” Reynolds laughs.

“It’s been around for 40 years!” cries Coles. “They should know what they’re getting into!”

Reynolds agrees. “What do you expect? It’s not The Sound of Music.”

But even the “unintentional Brads” as Lavelle dubs unsuspecting, normcore attendees, stick around for the whole performance.

At its root, “the show in itself is a lot of fun,” says Reynolds. “It’s fun being in the show, it’s fun watching the show. Whichever side you’re on, it’s just an enjoyable experience.”

Reynolds, Lavelle, and Coles have certainly enjoyed their side—the Bay Street regulars are a close bunch. Coles even has blood ties to this particular production.

“My little brother’s never done any theatre, and he’s Rocky,” Coles eagerly shares. “It’s exciting for me because I’m getting to be in a show with my brother.”

“I’m from Savannah, but a lot of my family has moved away,” Reynolds says. “So the theatre community—in particular Bay Street Theatre—has sort of become my family.”

“It’s a corny thing!” Reynolds admits with a smile. “But I do feel that way.”

After Rocky, the crew will put their heads together to work on Bay Street’s future productions (Coles always directs the holiday show—this year, it’s A Charlie Brown Christmas). They see Rocky as an introduction to Bay Street Theatre’s many offerings, and an exciting kickoff for the rest of the season.

“It’s like the start of the Christmas season!” Reynolds says. “It just starts with a corset and fishnets.”