Rolling with the changes

REO Speedwagon's Kevin Cronin on the realities of 'classic rock' 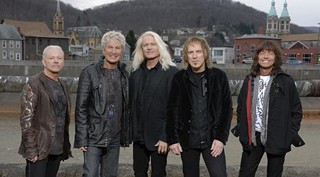 Kevin Cronin, second from left, has been REO Speedwagon's lead singer and chief songwriter since the mid 1970s

Anybody who lived through the 1970s will remember the rise of the Midwestern rock ‘n’ roll bands — REO Speedwagon, Kansas, Styx — and their dominance, for about half the decade, on the record charts.

That was then, of course, and this is now. That guitar–heavy music is referred to as “classic rock,” and while it gets plenty of radio play on stations dedicated solely to the old days,  the bands themselves – in some cases, what’s left of them – now play to dwindling crowds of aging rockers.

Kevin Cronin, the longtime lead singer of Chicago’s REO Speedwagon, does not consider himself a relic. Cronin and his cronies will perform Saturday, March 13 in the Johnny Mercer Theatre, conjuring “Ridin’ the Storm Out,” “Roll With the Changes,” “Can’t Fight This Feeling,” “Keep on Lovin’ You” and their other monster ghosts for yet another celebratory run–through.

In the ‘70s, REO sold 40 million albums – the Hi Infidelity album alone was certified five times platinum – and Cronin, 51, has put it all into perspective.

Nostalgia, Cronin believes, is all well and good. But he’s a happy man, and for him, these are the good old days.

REO used to play in Savannah all the time. Do you remember coming here?

Kevin Cronin: I have a little soft spot in my heart for Savannah. I always have. I’ll never forget that sweet little historic area right along the river there, with all the squares, and the colonial vibe it’s got down there. I’m a sucker for that kind of stuff.

As a matter of fact, we had a bus ride a couple of years ago where we were driving from Jacksonville up to Myrtle Beach. We had a day off and some time on our hands. So I talked everybody into pulling the bus over in Savannah, and having lunch. And just kind of cruising around and taking a day to soak it up.

It’s been a while since the band’s big successes. Some classic rock guys don’t like talking about the notion of “the glory days.” Can we go there?

Kevin Cronin: We can go there, but here’s my take on it. We’re getting ready to celebrate the 30th anniversary of Hi Infidelity with a boxed set and all sorts of goodies. I just recently found the original demo tape that that album was built upon. It turned up in a box in our manager’s garage.

We’re embracing it. That time, for us, was something that very few artists – very few human beings – get to experience. A phenomenon like we went through there. You’ve very fortunate if it even happens once to you, and I wouldn’t trade it in for the world, even though it had its dark side, as well.

I know some bands that hate the words “classic rock,” they think it’s this horrible stigma. And I’m like, dude, that’s what we are! It’s just a word that describes the music of a certain time. What’s your problem with it? I don’t get why people can’t be comfortable in their own skin. Wherever you are, if you’re playing music and making a living doing it, who cares? Who cares if you’re playing at Dodger Stadium or at the Orange County Fair? If there’s people out there, and they’re singing along and loving what you’re doing.

I feel like I’ve always been kind of a late bloomer. I was the last one of my friends to get laid, stuff like that. That feels kind of crummy at the time, but I think it’s served me well, because I feel like these are the salad days, artistically, for me. I know I’m singing way better now than I did back then.

Is the personal satisfaction of writing good tunes enough? When for all intents and purposes, they’re falling on deaf ears?

Kevin Cronin: To a certain extent they are, and some people get discouraged by that. There is a certain frustration in it, because when you write a song that you feel is of the same quality of a song you wrote 30 years ago that was a Number One record, that’s just human nature.

We keep making records, and I write songs not because I’m looking to get a song on the radio. I write songs because I can’t help it. It just happens. They’re my way of dealing with the craziness of my life.

There’s a scene in the movie Crazy Heart where Maggie Gyllenhaal asks Jeff Bridges “So, Bad, where do the songs come from?” And he looks at her and he goes “Life ... unfortunately.” I about shit myself. Because that’s so perfect.

Your most recent album, Find Your Own Way Home, came out in 2007.

The trick is, you have to be satisfied with different kinds of success. You have to measure it in terms of quality, and personal satisfaction. You have to change the way you look at things.

There are so many guys who just refuse to tour because they can’t play the type of gigs they used to play in the salad days. And I’m like dude, you are missing it! Just go play for the people that are there, and share the gift that you’ve been given. That’s the way I look at it. And have fun. It’s fun being out there playing.

You work a lot with Styx, with Tommy Shaw and J.Y. Young. What’s that like? The vibe in the room must be pretty cool.

Kevin Cronin: Yeah, it’s awesome. REO and Styx together, it’s a magical combination. It’s funny, talk about the heyday, back then we never played with them. There was this huge competition between us. We didn’t even know those guys, just that we’re from the same town.

Tommy and I wrote a song together – “Can’t Stop Rockin’” – that’s our encore every time we play together. We get both bands out onstage together, and it’s a frickin’ riot. They’re like our best buddies in rock.

Tommy and I share that feeling that we’re getting better every day. We don’t feel like our best days are behind us. We both embrace those days, because who wouldn’t? Who wouldn’t want to be the most popular band in the world? It was great.

But the fact is, we’re out there now, and we’re just having a great time.