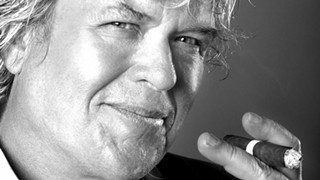 One of Ron White's oldest bits - and one of his funniest-ever - is the story of how it took the Sears Auto Center took three-and-a-half hours to change the four tires on his van.

"Apparently," the comedian says, "they had to whittle one of ‘em out of a piece of wheat."

After ponying up $980, "I take a right hand turn out of the mall ... the left rear wheel falls off. It FALLS OFF. It FALLS the F--- OFF. Turning my van into a tripod, spinning me into a dimension of pissed-off I have never been in before in my life."

In White's story, it turns out the "tire guy" at Sears, who had simply forgotten to tighten the lug nuts on the van, had spent three whole days at Tire College.

"Well apparently he was sick on LUG NUT DAY. But they still let him work on my van."

This story has particular significance because, according to White, it happened at a Sears, in a mall, in Savannah, Georgia quite a few years ago.

And he swears it's true.

The other punchline: White's got a concert date at the Johnny Mercer Theatre Sept. 30. Ticket info hasn't been made available.